A 100km (62-mile) SMART-style tunnel linking Ayutthaya and Samut Prakan has been suggested as the latest solution to tackling floods in Bangkok, Thailand. Although the 10m high x 24m wide tunnel would cost in the region of 200 billion baht (US$6.5 billion), Thailand’s Underground and Tunnelling Group (TUTG) Chair, Suchatchawi Suwannasawat – who put forward the idea – believes the project “suits Bangkok better than any other alternative.”

The super tunnel has won early backing from Bangkok Metropolitan Administration’s deputy governor Teerachon Manomaiphibul, who has urged the government to get behind the project. “The Bangkok Metropolitan Administration can’t do it alone. It needs a huge investment,” said deputy BMA governor Teerachon. “But I agree with the project.”

Advocates of the tunnel argue that conventional methods for directing water in Bangkok are failing to do the job. The varying topography of the city makes it difficult for officials to drain and direct water to the routes they want and many existing canals are illegally blocked by houses, which limit their effectiveness. Draining water from land that is densely occupied by communities can also lead to conflicts. But these problems would be avoided if a tunnel was built and “its construction has nothing to do with the expropriation of vast tracts of land as required by the construction of a floodway,” said Suchatchawi.

The tunnel would be built near the Bang Pa-in-Samut Prakan outer ring road, extending 100km from Ayutthaya’s Bang Pa-in district to Samut Prakan, where the tunnel would exit to the Gulf of Thailand. The proposal is to build a double-deck tunnel (similar to Kuala Lumpur’s SMART tunnel), with its upper half forming a six-lane road and its lower half serving as an overflow sewer able to drain 130 million cu/m a day of storm water. In the case of a major flood event (such as the one that has brought the city to its knees in recent months), the upper half of the tunnel could be turned into a floodway to boost drainage to 260 million cu/m a day. 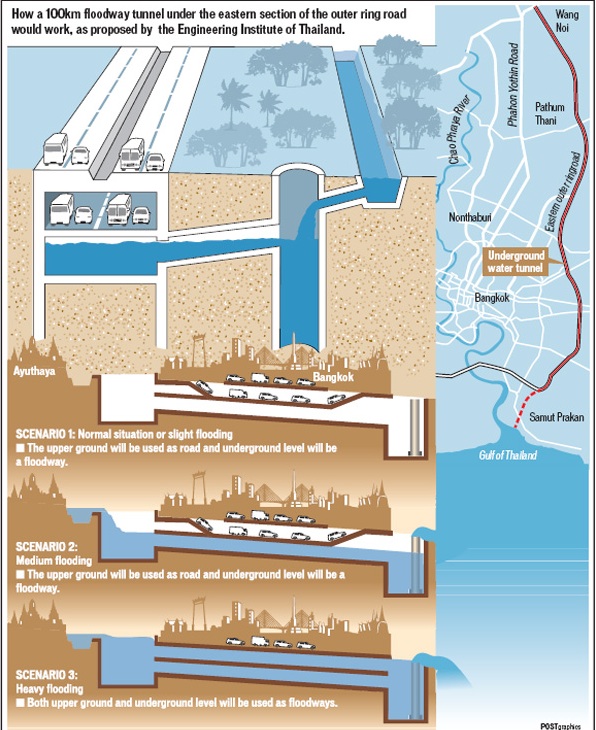 In order to “add value” to the project, floodwater could also be used to generate between 400 and 600 megawatts of electricity per year by way of incorporating a power generation shaft as part of the project. Construction of the tunnel has been estimated at two years on the basis that the project is separated into numerous construction contracts .

These are the Ratchada-Suthisan tunnel, construction of which began in the middle of this year, will run 6km from Ratchada-Sutthisan intersection to the Chao Phraya River. The 13.5km Don Muang tunnel, which will help drain water in Dong Muang, Chatuchak, Bang Khen districts and parts of the Sai Mai area; and the 9.5km Suan Luang Ro 9 tunnel whose drainage will cover 85 square kilometres, including Phra Khanong.

The Thailand Underground and Tunnelling Group (TUTG), part of the Engineering Institute of Thailand, will host the 2012 ITA-AITES World Tunnel Congress in Bangkok between 18th and 23rd May. For more information visit: http://www.wtc2012.com/