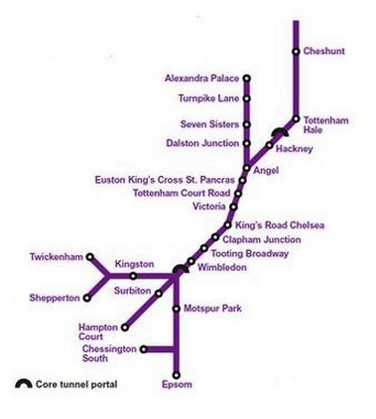 London First, a group of business leaders chaired by former Transport Secretary, Lord Adonis, with the mission to make London the best city in the world in which to do business, has unveiled its proposed route for the £12bn ‘Crossrail 2’, a major new rail link connecting south-west and north-east London, via a tunnel beneath the city centre.

The new line, Crossrail 2, would transform journeys for commuters from the south-west and the north-east, including Wimbledon, Kingston, Twickenham, Hackney, Islington, Tottenham, Cheshunt and Hertford East. It would also provide essential relief to major London interchanges, including Euston, Victoria and Clapham Junction, and reduce pressure on congested Tube lines. In some cases, journey times would be more than halved.

Rapid population and central London employment growth will create the need for significant additional capacity on London’s transport networks from the mid 2020s onwards. Over the next 20 years, employment in London – mostly in central London – is projected to rise by 700,000 and the capital’s population is expected to rise by 1.5 million to almost 10 million, its highest level ever.

If the necessary planning and consultation for Crossrail 2 were to begin now, the new line could be open by the early 2030s.

The plan is put forward in the final report from London First’s Crossrail 2 task force,.  The report’s main conclusions are:

After considering other types of service and route options, the task force concluded that the proposed Crossrail 2 scheme with suburban and regional services was by far the most cost-effective method of delivering the necessary step-change in capacity required. Without Crossrail 2, at least £6bn would need to be spent on incremental improvements to existing tube and rail infrastructure, offering a fraction of the benefits, while still leaving London congested. Congestion is projected to be particularly severe on a SW-NE alignment, which receives limited benefit from Crossrail 1 and Thameslink.

Undertaking a detailed study of potential options for funding and financing Crossrail 2 is a priority for future work and should take into account the lessons learned from Crossrail 1, Thameslink and HS2.  The report recommends that the Mayor should now take forward work on detailed planning and consultation, with the aim of developing the basis of a safeguarded route for when the Department for Transport goes out to consultation in late 2013. This would potentially enable construction to begin in the 2020s and Crossrail 2 could then open in the early 2030s.

Jo Valentine, Chief Executive of London First, said, “The UK faces a stark choice: go on investing in London’s transport to keep pace with population and jobs growth – or stifle London’s future success with bottlenecks. And we have to make the decision now. We cannot afford the decades of indecision that delayed getting started on Crossrail 1.

“Even with the major transport programmes that are already planned or underway, by the late 2020s most Tube and train carriages will feel like sardine tins for much of the day. That’s bad for London, of course, but as the capital is the engine room of the UK economy, it would be damaging to the country as a whole.

“I hope that we will see the politicians – at Westminster, City Hall and our town halls – join the people and businesses of London to get behind this project and make it happen.”

Andrew Adonis said, “Today’s report sets out a compelling plan with strong business support. Crossrail 2 is an integrated tube and rail service connecting south-west, central, and north-east London, benefiting millions of passengers and jobs. Crossrail 1 provides a new east to west London line; Crossrail 2 is equally important for south-west to north-east London routes, where congestion on rail and tube lines will be unbearable by the late 2020s.

“Without Crossrail 2 by 2030, Euston and other tube stations at mainline termini will be so congested they might have to be closed for parts of each weekday because of the danger to passengers.  Waterloo, Victoria, Euston, Kings Cross, St Pancras and Clapham Junction all gain massive congestion relief from Crossrail 2, which is essential to keep London moving as its population rises by another 1.5million over the next 20 years and the number of rail journeys into London termini increase dramatically.”

The Mayor of London, Boris Johnson, said, “The case for the construction of Crossrail 2 is incontestable and is made forcibly in this report. Over the next 20 years London’s population is forecast to expand to levels that will clog the Tube and rail arteries of our great city if we do not provide more capacity. There is no time to lose and my team will work closely with London First and others on developing plans for this vital railway.”