The last 160m long, 23,000 tonne Immersed Tube Tunnel (IMT) pre-cast unit for Hong Kong MTR’s Shatin to Central Link (SCL) Cross-Harbour Tunnel has successfully been installed in Victoria Harbour. The successful installation in mid-April, approximately 10 months after the installation of the first IMT unit in June 2017, marks the completion of the immersion of all of the project’s 11 IMT pre-cast units on the near 1.7km long tunnel crossing. This is a significant step forward in the construction of the SCL project.

The remaining works for the cross-harbour tunnel will follow and the final breakthrough is expected to take place in early 2019.

The immersed tube is being constructed under Contract 1121 – Cross Harbour Tunnels by the Penta-Ocean/China State JV, which was awarded the US$554M contract in December 2014.

Targeted for commissioning in 2021, the new SCL rail harbour crossing will extend the East Rail Line from Hung Hom Station to connect to the future Exhibition Centre Station in Wan Chai North and further on to the existing Admiralty Station. Passengers on the East Rail Line will then be able to travel from Hung Hom to Admiralty in just five minutes without any interchange

The project has been split into two sections, the northern 11km long Tai Wai to Hung Hom section, and the southern 6km Hung Hom to Admiralty section, which includes the Harbour crossing. Multiple tunnelling techniques, including Variable Density TBM works, Drill and Blast and the immersed tube have been used on the complex project. 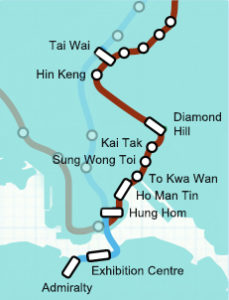