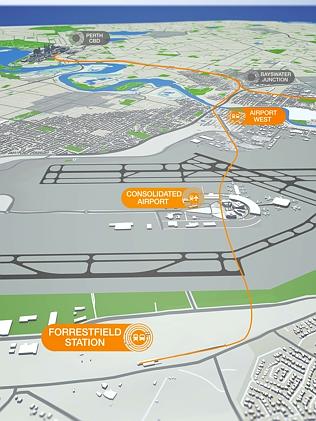 Western Australia Premier Colin Barnett has released details of a new 8km long twin tube tunnel that will form the backbone of the $2bn Forrestfield-Airport rail link in Perth. Construction is due to start in 2016 with completion expected in 2020.

“The rail line will head east from the Midland Line near Bayswater Station and then tunnel under the Swan River and Tonkin Highway before reaching the airport and then go on to Forrestfield,” Mr Barnett said.

“This Forrestfield-Airport Link project represents a real game changer in terms of public transport in this city.

“For the first time people will be able to catch a train to the airport and importantly, this will also open up a brand new rail corridor to the eastern suburbs and foothills, allowing a 20-minute rail journey into the Perth central business district.

“It is a key infrastructure project that furthers the long-term strategic interests of the city by opening up Perth’s eastern suburbs which in the short term will also create hundreds of construction and engineering jobs.

“This rail line will bring enormous benefits to airport passengers and staff working at the airport. In particular, this will be a boon for Western Australia’s thousands of fly-in fly-out workers who will no longer have to drive to the airport and leave cars parked there for weeks on end.

“The tunnels are a really exciting engineering project that also means this railway line can be built in the most timely fashion with the least disruption to residents, businesses, traffic and the airport.

The Premier said the plans showed there would be a station at Belmont near the present domestic terminal, a station under the Consolidated Airport at the current international terminal, and a bus-train interchange station in Forrestfield.

He said the project would be the fulfilment of a key election promise and was testament to the Liberal National Government’s strong investment in infrastructure.

Mr Barnett said until detailed tenders were received, it was difficult to estimate the precise cost of the project but the Government expected it to be around the $2.2bn mark.

Transport Minister Dean Nalder said the rail line would take the form of twin-bored tunnels and would become the longest section of underground rail in Perth.

“We expect these three new stations will add an extra 20,000 boardings on the Transperth network by 2021,” he said.

Mr Nalder said this project would be a tremendous asset to people from a wide area.

“It cannot be underestimated how important a community project this is.  This rail connection will improve public transport access for passengers from Bayswater, Belmont and Forrestfield as well as areas such as Wattle Grove, Maida Vale and High Wycombe,” he said.

Mr Nalder said the Project Definition Plan would be released within the next couple of weeks. Community information sessions with relevant local government areas would begin next month.

The animation can be viewed at http://www.youtube.com/theptawa