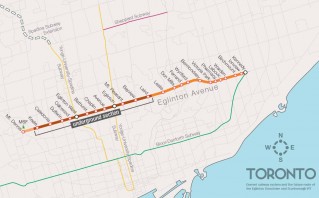 On November 12, the Metrolinx Board of Directors approved the award of a CA$177 million construction contract for the Eglinton Crosstown East Tunnel to a joint venture of Aecon and Dragados, signalling another important milestone in the largest rapid transit expansion in the City of Toronto’s history.

“Approval to award this contract means Metrolinx and the Province of Ontario can keep moving forward to deliver public transit that will transform the way residents travel across the region,” said Metrolinx President and CEO, Bruce McCuaig. “The Crosstown project is a priority for Metrolinx and regional transit, making it easier for people to choose transit.”

This is the second of two tunnelling packages to be awarded for the Crosstown Project. Excavation of the first, 6.2km (3.85-mile) twin bore tunnel segment, from the west launch shaft area near Black Creek Drive to Yonge-Eglinton station, began in June 2013 following the award of a CA$320 million contract to Crosstown Transit Constructors – comprising Obayashi Canada, Kenny Construction, Kenaidan Contracting and Technicore Underground – in September 2012.

Aecon/Dragados JV will begin work on the Crosstown East Tunnel in late 2013, to excavate approximately 3.25km (2-miles) of twin tunnels using two of the project’s four owner-procured Caterpillar TBMs, and precast concrete tunnel lining segments that are also supplied by Metrolinx. The twin tunnels are to be driven from a launch shaft located east of Brentcliffe Road to a retrieval shaft located east of Yonge Street.

A Request for Pre-Qualifications from tunnel contractors and jet grout subcontractors for the Crosstown East Tunnel was publicly advertised on the MERX website in January 2013. Submissions were received on February 14, with eight respondents requesting copies of the Pre-Qualification package, and eight respondents/JV entities providing submissions. All submissions received were reviewed by the evaluation team in the presence of a Fairness Monitor.

Submissions that met mandatory requirements, and received a minimum score of 70 points for the qualitative evaluation, were invited to bid in the subsequent tender process. Eight respondents/JV construction contractors and eight jet grout subcontractors met the specified requirements and were approved to proceed to the tender stage.

Specifications and drawings were prepared for the Eglinton Crosstown East Tunnels contract and the bid package was issued on July 9, 2013, to all pre-qualified entities. Before the tender close, two of the pre-qualified contractors joined to form a new JV. This proposal and the new single entity was acceptable to Metrolinx, meaning the total number of pre-qualified bidders for the contract was reduced to seven.

Metrolinx received a total of three bid submissions on September 12, 2013, out of the seven pre-qualified bidders. Tender prices ranged from a low of $176,663,700 to a high of $224,699,345 exclusive of HST. The remaining four pre-qualified bidders who did not participate in the bid indicated that the major reasons included: insufficient tendering period for the project, high number or pre-qualified contractors, required utility work, backlog of work and other potential projects.

The Eglinton Crosstown Project is a key project identified in The Big Move, the regional transportation plan for the Greater Toronto and Hamilton Area (GTHA). Currently, Metrolinx has $16 billion worth of projects underway that make up an extensive network of regional rapid transit projects.

The tunneling contracts for the Crosstown Project have been awarded directly by Metrolinx, but Infrastructure Ontario will oversee the procurement for the construction of stations, track and signaling.

For more information on the Crosstown project, visit: www.thecrosstown.ca/tunnelling.

The Eglinton Crosstown is a light rail transit line that will run along Eglinton Avenue between Mount Dennis (Weston Road) and Kennedy station. The 19km (11.8-mile) corridor will include a 10km (6.2-mile) underground section, between Keele Street and Laird Drive. The Crosstown is a $4.9 billion (2010$) investment from the Government of Ontario to expand transit in Toronto. It is the largest transit expansion in the history of Toronto.

On behalf of JIM Technology (JIMT), TERRATEC has announced the delivery of two of the four, 6.24m diameter EPBMs that…