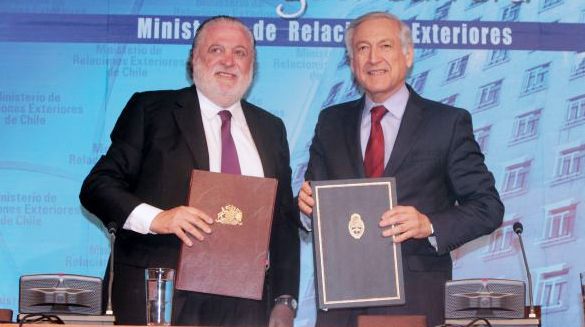 On Tuesday, January 6th, Argentina and Chile signed the creation of a bi-national entity responsible for constructing the Las Leñas Pass tunnel project (Ebileñas), which will link the two Andean neighbors.

This is the third tunnel planned under the Maipu Integration and Cooperation treaty, which celebrates the 30th anniversary of the Friendship and Cooperation agreement signed by the two countries ending decades of territorial and political disputes.

The other two additional protocols that were stamped just a few days ago, refer to the bi-national entity for the construction of a “low height trans-Andes railway tunnel” and the Paso de Agua Negra international tunnel.

The accord to ensure greater connectivity was signed by Chilean Foreign minister Heraldo Muñoz and the Argentine ambassador in Santiago, Ginés González García.

The Ebileñas project will collect all the necessary technical data on both sides to better decide where to drill and construct the highway that will be connecting Chile’s VI region and the south of Mendoza province.

“The Las Leñas tunnel project represents the commitment of Chile and Argentina with the development of their regions and provinces, but also for Mercosur countries”, said a release from the Argentine foreign ministry.