The New Zealand Government is bringing Auckland’s transport infrastructure into the future by moving forward with an additional Waitematā Harbour crossing which will help progress light rail from Auckland’s CBD to the airport, and create a linked-up rapid transport network as part of a 30-year plan. The 24km long, $14.6bn route option endorsed by the cabinet features a tunnelled alignment under the city centre and Harbour.

Grant Robertson, Minister for Infrastructure said, “We are not going to repeat the mistakes of ad hoc planning and a scramble to build infrastructure when it is too late – this rapid transit system is about making sure Auckland is able to flourish as it grows.

“We have deliberately chosen this option for Auckland Light Rail that will integrate with other major infrastructure projects across Auckland, like the additional Waitematā Harbour crossing, the Auckland Rapid Transit Plan and Kāinga Ora Large Scale Projects.”

Michael Wood, Minister for Transport added, “The Government is taking the next step regarding Auckland light rail from the CBD to the Airport, and is proceeding with the option recommended by the Auckland Light Rail Establishment Unit, which will see Light Rail in a tunnel from Wynyard Quarter to Mt Roskill, which comes to the surface and runs alongside the SH20 motorway to the airport.

“Addressing future disruption is front of mind for the Government, and designing a support package alongside business will be a major part of this engagement in 2022. We are making a commitment to businesses in the area that significant disruption will be addressed through a comprehensive package, including direct financial support.

“Delivering a high-quality, world-class transport network to New Zealand’s largest city is a key priority of this Government. We are already unlocking the city through transport projects such as the Eastern Busway and the City Rail Link, both of which make moving around Auckland faster, easier, and more sustainable. Aucklanders have clearly relayed that they recognise the need for this investment, they want us to get on with it, and we are.” 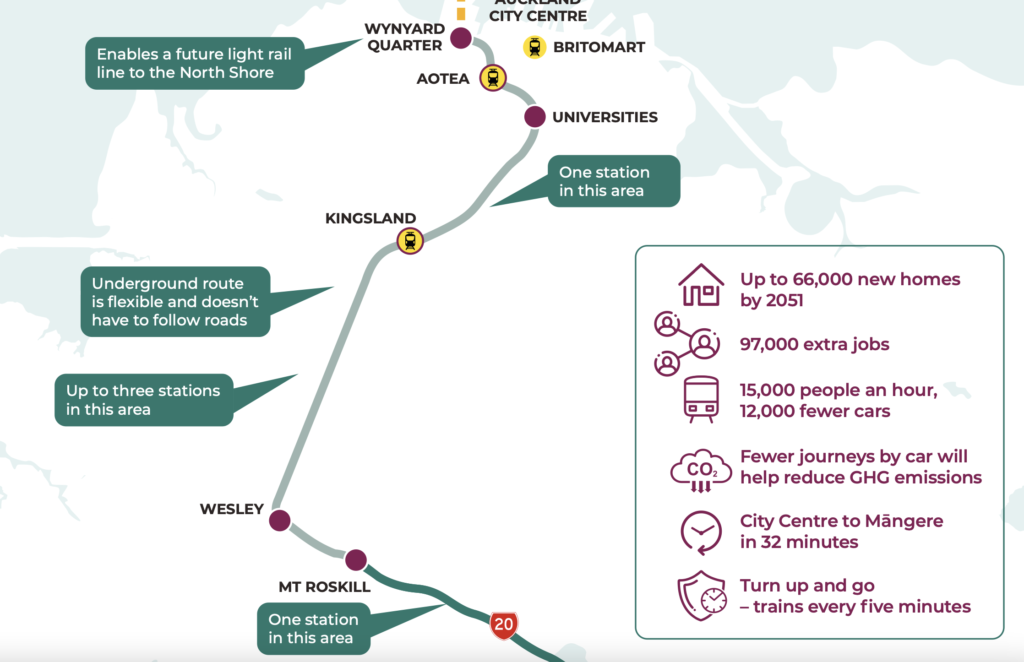