Auckland’s City Rail Link US$9M TBM, known as Dame Whina Cooper, has arrived from its factory in southern China. The 7.15m diameter Herrenknecht EPBM that will be used to excavate the rail tunnels for New Zealand’s largest ever transport infrastructure project arrived in sections on board the BBC Orion and will now be trucked to the City Rail Link site in Mt Eden for reassembly. 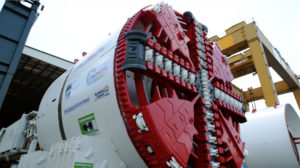 Over the next few days a small convoy of trucks will transport the TBM from the port to Mt Eden, where it will be reassembled and retested before it starts tunnelling next year.

“The TBM was thoroughly tested before leaving China, but there will be further checks on site. It is very advanced technologically and we want to make sure we have a concrete-solid machine in place and ready to do the job it has been specifically designed for – operating in Auckland’s unique soil conditions to build CRL’s rail tunnels,” says Francois Dudouit, Project Director for CRL’s Link Alliance.

The Link Alliance – the group of New Zealand and international companies building the substantive tunnels and stations contract for CRL Ltd – will use the TBM to excavate two 1.6km-long tunnels from Mt Eden to the CBD to link with the tunnels already dug from Britomart Station.

Work will start later this week on the excavation of the first 51m of the tunnel at Mt Eden. The excavation of the cavern and trench provides room for the TBM to be fitted into position to take over mining. TBM tunnelling is due to start next April, with excavation of the second tunnel planned to start in March 2022. Each tunnel is scheduled to take 9 months to excavate at top rates of 32m per day.