Investigations are now underway to make an 11km tunnel the central component of an upgraded Great Western Highway between Katoomba and Lithgow, forming the longest road tunnel in Australia.

Deputy Premier John Barilaro said the proposed tunnel would transform the state by better connecting the Central West to the East Coast. 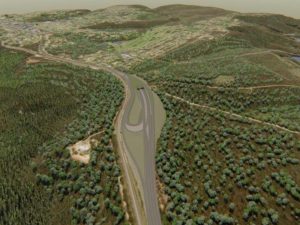 “We have already committed to tunnels at Blackheath and Mount Victoria – this proposal would see those tunnels joined together, creating the longest road tunnel in the country,” Mr Barilaro said.

“This is an immensely complex and ambitious plan, but we’re working hard to make it happen because we know what a difference it will make to the lives of commuters, to regional businesses who need access to Sydney and vice versa, to freight companies, to families visiting relatives and to holiday makers.

“The NSW Government is committed to building a safer and stronger regional NSW and this corridor will enhance the state, significantly cutting travel times between the city and the bush.

“Completing the Katoomba to Lithgow section would deliver the final stage of a 130km upgrade, delivering dual carriageway on the Great Western Highway, a multi-decade program of works, making a safer, more resilient corridor.”

Minister for Regional Transport and Roads Paul Toole said the solution would link the two tunnels already determined for Blackheath and Mount Victoria to deliver a safer, more reliable connection through the Blue Mountains.

“The NSW Government knows how important this upgrade is to the people who use the Great Western Highway every day and in improving connections between Sydney and the Central West, which is why we committed $2.5 billion to deliver a once-in-a-generation upgrade to this key corridor,” Mr Toole said.

“As part of this upgrade, we’ve already committed to a 4.5km tunnel to bypass Blackheath and a 4km tunnel underneath Victoria Pass, one of the steepest roads in NSW.

“We’re now investigating connecting those two proposed tunnels into one longer tunnel. This would be a history-making project, delivering Australia’s longest road tunnel and allow motorists to avoid all the current pinch points from Blackheath in the east to Little Hartley on the western side of Victoria Pass.

“It will also mean less disruption for local residents and businesses during construction and a smoother, safer journey for those travelling underneath Blackheath and Mount Victoria as well as those travelling above.”

Mr Toole said the eastern entry for the proposed tunnel will be on the outskirts of Blackheath to minimise impacts on local homes and be built in a section of National Park land to the south of Evans Lookout Road.

“At the Western end, the portal location in Little Hartley has been modified to improve safety and reduce property impacts in the valley.”

Transport for NSW is engaging with National Parks about the upgrade’s impacts on land adjacent to the proposed portals. Neither portal would impact the Greater Blue Mountains World Heritage Area.

Mr Toole said heavy traffic over the Easter weekend had reiterated the importance of the Great Western Highway Upgrade and safe, reliable connections over the mountains for locals and travellers alike.

“This is an immensely challenging project but, once complete, it will deliver dual carriageway in both directions for over 100km,” Mr Toole said.

“Should our investigations into a long tunnel determine that it isn’t viable, the community can be assured that we would proceed with a tunnel at Blackheath and a tunnel at Mount Victoria.”

Construction on the Great Western Highway Upgrade is expected to start at Medlow Bath in 2022, with the full upgrade expected to be completed within 8 to 10 years.

Mr Toole said the community would continue to shape the design of the upgrade as it moves towards construction.

“Later this year, Transport for NSW will consult with the community on the entire upgrade, including the proposed Blackheath to Little Hartley Tunnel.

“Between now and then, residents will see plenty of investigation work going on to make sure we have all the information we need to reduce the environmental impacts of the project.”