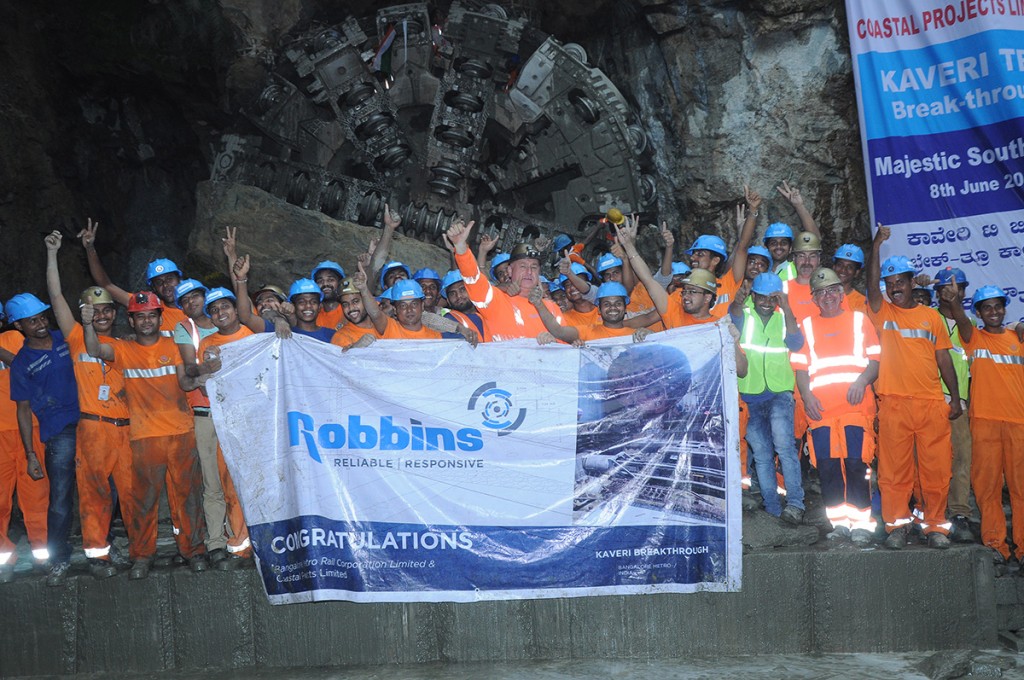 June 8, 2016 saw one of two 6.4m diameter mixed-face EPB machines break through on the Namma Metro in Bangalore. After being launched in March 2015, the TBM named Kaveri made its way through its difficult 750m drive from Chickpet to Majestic.

Sister machine Krishna, launched in December 2015 is not far behind, and is expected to break through in approximately two months.

“I am particularly proud of being involved in this project, and to support BMRC with the completion of this tunnel drive and bringing the project back on schedule. This is also the first time The Robbins Company has been responsible for the complete scope of operations on a project,” noted Jim Clark, Projects Manager with Robbins India. “One of the biggest challenges we faced was carrying out cutterhead interventions under compressed air in mixed ground conditions that consisted of varying grades of granite in the lower half of the face, and loose, unconsolidated material in the upper section of the face.”

Clark said that on numerous occasions, compressed air would percolate through to the surface, forcing crews to abort cutterhead interventions. They eventually found a solution by pumping a weak mix grout though the mixing chamber, and into the geology surrounding the tunnel face. The weak mix grout stabilized the ground sufficiently so the cutterhead interventions could be completed.

The Robbins crew carried out tunnelling operations while the station was being constructed around them to mitigate delays incurred before they took over project operations. The project’s most difficult challenges included a low overburden and consolidated ground along the alignment, and the discovery of several uncharted wells directly on the alignment. In addition, the majority of the tunnel was bored directly beneath buildings constructed upon what is today considered substandard foundations.

This portion of the Phase One Metro tunnels runs from Chickpet to Majestic at Namma Metro. Once Krishna breaks through, the North and South runs of Bengaluru will be connected, allowing service to an average of 40,000 passengers daily. It is being completed under a tripartite agreement between Robbins India, Coastal Projects Limited, the lead contractor, and project owner, Bangalore Metro Rail Corporation Limited. It is anticipated Phase One will be open in its entirety by November, 2016.