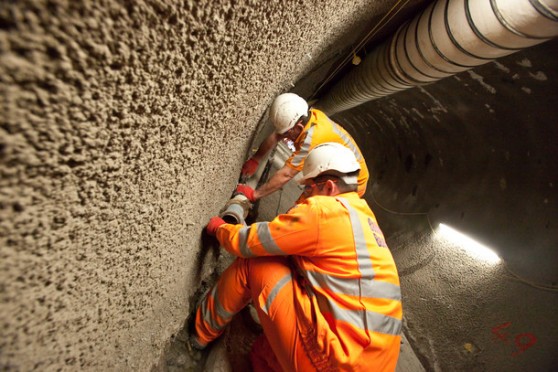 Crossrail’s BBMV JV (Balfour Beatty Civil Engineering, Alpine BeMo Tunnelling, Morgan Sindall and VINCI Construction) has completed the projects’ first two sprayed concrete tunnels. The tunnels, under Finsbury Circus in the City of London, are part of the C510 contract – Early Access Shafts and Spray Concrete Lining works for Whitechapel and Liverpool Street station tunnels. The two tunnels are part of the Liverpool Street Station section. The 4.5m diameter tunnels have been built from the main access shaft within the Finsbury Circus worksite.

The two tunnels are temporary structures and will be used for compensation grouting, one of the ways that Crossrail will control any ground movements that could result from tunnelling activity.

Tubes a’ Manchette will be drilled and installed from the temporary tunnels allowing the contractor to inject grout into the ground. This will stabilise the ground and limit surface settlement.

A Sprayed Concrete Lining (SCL) technique has been used to build these tunnels. This technique involves rapidly spraying the excavated ground with concrete to stabilise it and form the permanent tunnel lining. The first SCL tunnel measures 80m in length and the second (running east from the worksite) is 100m long.

The Spray Concrete Lining technique will be used to build 12km of station platform tunnels, passages, access and grout tunnels along the Crossrail route where smaller, relatively short tunnels are needed.

Colin Niccolls, Crossrail’s Whitechapel & Liverpool Street Platform Tunnels Project Manager said: “Crossrail will primarily use two different types of tunnelling technique to build the new rail tunnels and stations. While tunnel boring machines will create the new rail tunnels, work has commenced on creating the station tunnels using mining techniques to excavate the ground which is then sprayed with shotcrete to form the tunnel linings.”

Once Crossrail works are completed at Moorgate in 2017, Finsbury Circus will be re-instated to its pre-construction condition.