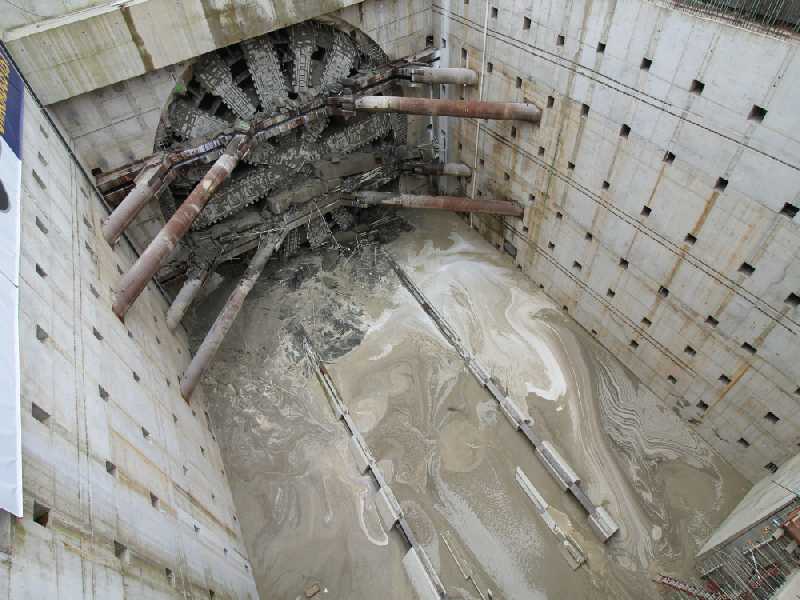 Led by Client, Washington State Department of Transportation, and the design and build contractor, Seattle Tunnel Partners, the tunnel project will now move a two-mile section of SR 99 underground when it wraps up in early 2019. Crews will then demolish the viaduct, clearing the way for the city’s new waterfront.

“This is a historic moment in our state’s transportation history,” Gov. Jay Inslee said. “Innovation and perseverance are the engines that keep Washington in the forefront. There is still more work ahead but this moment is one worth celebrating.”

A drone’s view of Bertha’s breakthrough

Crews will spend the next several days removing steel support braces that stand between Bertha and the interior of the 90-foot-deep disassembly pit. When the braces are gone, crews will drive the machine into its final position and begin cutting it into pieces for removal. As owner of the machine, the contractor will determine which pieces could be salvaged for use on other projects or recycled.

“We were always confident that we would successfully complete the tunnel drive,” Seattle Tunnel Partners Project Manager Chris Dixon said. “The dedication and commitment of everyone on the Seattle Tunnel Partners team has been exceptional, and we wouldn’t be at this milestone without the hard work of our crews. We look forward to continuing this outstanding progress through project completion.”

STP still has significant work to complete before the tunnel opens. Crews must finish building the double-deck highway within the tunnel, and mechanical and electrical systems, plumbing and safety features must also be installed.

Even as crews are installing these systems, crews will begin the extensive task of testing and commissioning the tunnel to ensure it’s ready for traffic. Inspectors will individually test more than 8,500 separate components before testing each of the tunnel’s various systems as a whole.

“This truly is a remarkable feat of engineering,” Transportation Secretary Roger Millar said. “There’s still work to be done, but the individuals working on this job should be proud of this accomplishment.”

Over the next several years, the City of Seattle’s Waterfront Seattle project will build new public space and a surface boulevard in the place of the double-deck viaduct, which is scheduled for demolition in 2019.

“Today is a major construction milestone in our plan to reclaim Seattle’s waterfront,” Seattle Mayor Ed Murray said. “We are one step closer to taking down the viaduct to make way for a reimagined waterfront and surrounding downtown neighborhood. We will build a waterfront for pedestrians, transit and sensible car trips without a freeway wall casting a shadow over our vision of a well-connected 21st century city.”

“The new tunnel will provide fast, reliable travel for transit and freight past downtown traffic, and reunite the city with its waterfront,” said Constantine. “The breakthrough highlights what we can accomplish when we think big, act boldly, and embrace the ‘can-do’ tradition of our region.”

“This Alaskan Way route is essential to a strong port and linking our industrial lands between SODO and Ballard,” Gregoire said. “Strong, vibrant transportation connections are essential to keep our economy growing and creating middle-class jobs.”

Manufactured in Japan by Hitachi Zosen Corp., Bertha arrived in Seattle in April 2013. The machine was launched from a pit near the stadiums in July of that year. In December 2013, STP stopped mining after measuring increased temperatures in the machine.

After an investigation, STP discovered damage to the machine’s main bearing. Crews completed repairs and resumed mining in December 2015. The cause of damage to the tunneling machine is in dispute and is currently in litigation. Neither WSDOT nor STP is able to comment further on ongoing legal issues.

Tunnelling Journal is delighted to announce that delegates at our upcoming Cutting Edge Conference – to be held in Seattle on 13th – 15th November – will be among the first ever visitors to be allowed to journey through the finished tunnel as part of the Conference Technical Tour!