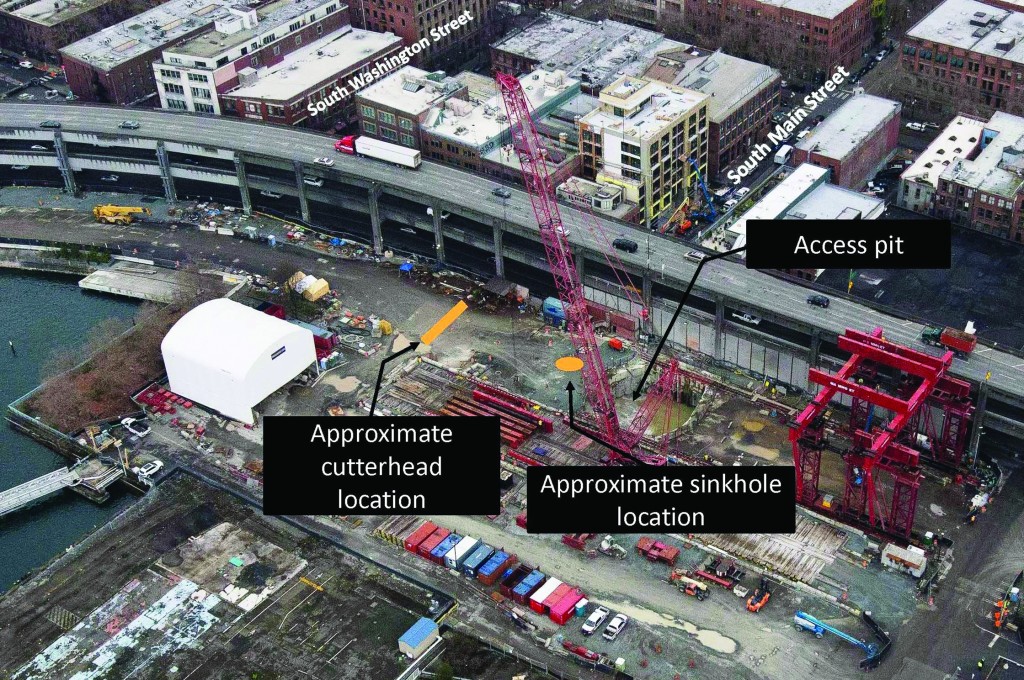 Seattle Tunnel Partners (STP) has received conditional permission to resume tunneling operations on the SR 99 Tunnel Project. STP resumed mining today after WSDOT conditionally lifted the “suspension for cause” that halted mining and barging-related activities last month following two safety incidents (a barge accident and a sinkhole that opened up behind the TBM shield later the same day).

As part of the conditions for lifting the suspension for cause, STP will be permitted to tunnel forward and install approximately 25 concrete tunnel rings. During this time, they must demonstrate that they have implemented a number of changes to ensure they can safely continue mining. These changes include:

WSDOT made the decision to conditionally lift the suspension for cause after its team of tunneling experts evaluated documentation submitted by STP over the past several weeks. While mining can resume, barging activities are still restricted pending submittal of additional documentation. STP will remove excavated soil by truck as they continue addressing the barging issue. Repairs to the pier that was damaged during the Jan. 12 barging incident were completed earlier this month.

Work was suspended for cause on Jan. 14 per section 14.2 of the contract, which says the state can suspend work without liability to WSDOT under a number of conditions, including the contractor’s failure to “correct conditions unsafe for the project personnel or general public.”

For more information on the incidents that occurred in the run up to the suspension see the Feb/March digital edition of North American Tunneling Journal.

The suspension for cause only addressed tunneling operations involving the tunneling machine and the loading of barges at the site. It did not apply to the other ongoing work under the design-build contract with STP or any other contracts being managed by the viaduct program.

After the suspension for cause was put in place, WSDOT notified STP that they would need to confirm the following things before mining could resume:

The tunneling machine is currently located west of the Alaskan Way Viaduct, near South Washington Street. The conditional lift will remain in place for approximately 160 feet of tunneling. During this period – which is considered part of STP’s initial testing phase – STP will be operating with additional communication with WSDOT and its tunneling experts.

If STP demonstrates that their revised mining procedures are effective, crews will continue mining an additional 100 feet north to a planned maintenance stop. Once there, crews could spend several weeks performing final maintenance before the machine tunnels beneath the Alaskan Way Viaduct.

WSDOT will fully close SR 99 through downtown for approximately two weeks while the machine passes beneath the viaduct. The closure date will depend on the tunneling machine’s progress.

WSDOT on Monday, March 7, notified Seattle Tunnel Partners that they could continue mining to a planned maintenance stop near Yesler Way. The notification came as STP completed the 25-ring demonstration period that was put in place when mining resumed on Feb. 23.

The underground maintenance stop is approximately 120 feet north of the tunneling machine’s current location near South Washington Street. The machine has traveled a total of 1,437 feet and the bored section of the SR 99 tunnel is now 15 percent complete.

STP will continue to operate using the changes and commitments that were put into effect during the conditional lift.

Barging still suspended
While mining is ongoing, barging activities are still restricted pending submittal of additional documentation. STP is removing excavated soil by truck as they continue addressing the barging issue. Repairs to the pier that was damaged during the Jan. 12 barging incident were completed last month.