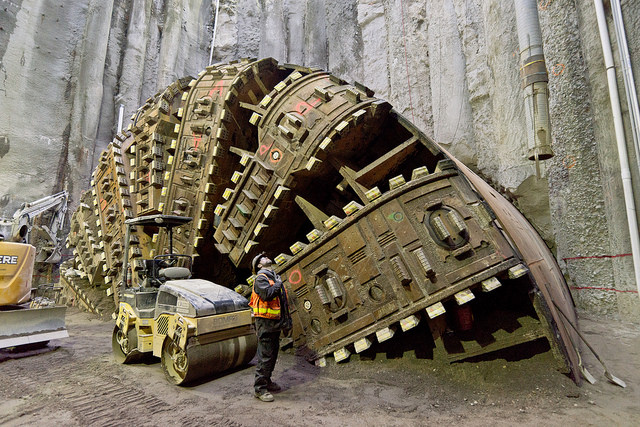 Early yesterday morning, December 22, Seattle Tunnel Partners (STP) moved the State Route 99 (Alaskan Way Viaduct Replacement) tunneling machine ‘Bertha’ forward and built a tunnel ring at the bottom of the 120-foot-deep pit crews built to access and repair the machine. STP plans to tunnel a short distance further in the access pit before giving crews a break for the holidays.

After the holidays, STP plans to mine out of the access pit toward a planned maintenance stop 450 feet to the north. Along the way crews will mine slowly while installing tunnel rings and continuing to run tests. When the machine reaches the maintenance stop – essentially an underground block of concrete just south of Colman Dock – crews will perform maintenance and make final adjustments before driving beneath the seismically damaged viaduct.

Tunneling under the viaduct will require a full closure of SR 99 through downtown for approximately two weeks. The contractor’s latest projections show that the closure will occur in March, but the actual closure date will depend on Bertha’s progress.

STP and Bertha’s manufacturer, Hitachi Zosen, are responsible for the repair effort, including the schedule. While the machine was under repair, STP continued essential work at the future tunnel portals, including construction of ramp and highway connections, and the buildings that will house tunnel operations.

STP crews halted tunneling in December 2013 after the machine overheated. After an investigation, STP discovered damage to the main bearing seal system and determined it needed to be replaced along with the main bearing. The cause of the damage has not been determined. Responsibility for costs associated with the delay will be determined through the process outlined in the tunnel contract.

Below is a new time-lapse video showing STP’s work to backfill the access pit. Crews finished backfilling the pit over the weekend.