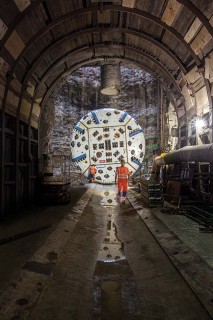 Near the banks of the Black River, a 7m (23ft) diameter Robbins Double Shield TBM and continuous conveyor system are starting up.   The mammoth machine was built using Onsite First Time Assembly (OFTA), a Robbins-developed method that saves contractors in shipping time, costs, and man-hours worked.

Using the OFTA approach, individual systems are tested prior to delivery but the machine is never fully assembled in the shop. Robbins field service technicians work on location with the contractor to assemble the machine and provide support. Launch for the 1.6km (1-mile) Black River Tunnel took place on November 18th, approximately three months after assembly began.

“OFTA was a challenging process for everyone onsite. We had to make numerous adjustments. Regardless, our team worked diligently to overcome challenges, and we were able to get the TBM assembled and launched relatively close to schedule,” said Mike Garbeth, Project Manager for Wisconsin-based contractor Super Excavators, Inc. In addition to the TBM, Robbins has supplied an in-tunnel continuous conveyor system and space-saving J-type vertical conveyor.

The Double Shield machine will be used in a unique manner as it bores. “We’re expecting decent production with minimal cutter wear, as the drive is in a softer shale. We are installing ring beams and lagging, and there will be a final monolithic pour after tunnel completion,” said Gregg Rehak, Tunnel Supervisor for Super Excavators. Rather than concrete segments, ring beams are being erected within the tail shield for installation as the machine passes.

As of early December, the machine has advanced approximately 60m (200ft) into the bore. “Tunneling started a bit slow while we made final adjustments to the TBM and conveyor assembly, but mining has picked up and we are beginning to reach anticipated production rates,” said Garbeth.

The major components of the Black River Tunnel include the launch shaft and reception shaft – approximately 11m (36ft) in diameter and 50m (165ft) deep – and a 1.7km (1-mile) tunnel with a finished diameter of 5.8m (19ft). Ric-Man Construction was subcontracted to build the shafts.

The project route runs along city property roughly parallel to the Black River, beginning at the launch shaft near the Black River Wharf and terminating near the Lorain Black River Wastewater Treatment Plant. A screening facility will be built at one end near the wastewater treatment plant, where water will be diverted into the storage tunnel, and a pump station will be constructed at the launch shaft site. When complete, the pump station will move water from the storage tunnel back into an existing sewer interceptor.

Mining is expected to be completed by spring 2014 and final project completion is set for 2015. When finished, the tunnel will have a storage capacity of 42 million litres (11 million gallons) per day, providing a significant boost in water quality for the city of Lorain.