Home > A brace of milestones for HS2

A brace of milestones for HS2

HS2 has reached two significant milestones this week with key works completed that are pivotal in preparing London Euston for the construction of HS2, and the announcement of the shortlist of the construction firms in the running to build Birmingham Curzon Street station – the high-speed rail project’s landmark city centre terminus. 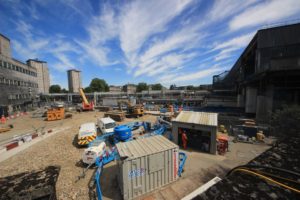 Work at London Euston centre around the demolition of the station’s western ramp and canopy. The structure has been in place since the modernisation of Euston in the 1960s as part of the electrification of the West Coast Mainline. Its removal, which took 13 weeks, paves the way for a new era of rail with the construction of the new HS2 Euston station.

Due to Covid-19 restrictions, work on site was paused on 23rd March but restarted on 16th April once Government-approved safe working practices were in place. The work was carried out by Network Rail, HS2 and its contractor Skanska.

Patrick Cawley, HS2 and Network Rail On Network Works Director, said: “The completion of this work is of major significance to the HS2 project and marks the first piece of structural work to Euston station in order for the new high speed station to be built. It has been an important and successful piece of collaborative work between the teams at HS2, Network Rail and Skanska.

Once complete, the station, could, for the first time, include a new entrance facing north towards Camden Town and west towards Hampstead Road and the shops and restaurants of Drummond Street.

HS2 Ltd has also revealed the names of the construction firms in the running to build Birmingham Curzon Street station – the high-speed rail project’s landmark city centre terminus.
The following bidders will be invited to tender for the £570M contract:

Following on from the government’s recent go ahead for the civil engineering elements of the project, today’s announcement will help provide confidence for Britain’s construction and engineering sector, with the contracts set to secure hundreds of jobs as the industry moves out of coronavirus lockdown.
The station itself – which recently became the first HS2 station to gain planning approval – will be net zero carbon in operation and will adopt the latest eco-friendly design and sustainable technologies, including capturing rainwater and utilising sustainable power generation, with over 2,800m2 of solar panels located on platform canopies.

It is designed to meet a ‘BREEAM excellent’ standard, which is an industry recognised standard for buildings that reduce energy usage and materials waste and minimise their impact on the natural environment.
HS2 Ltd’s Procurement and Commercial Director, David Poole said:
“Birmingham Curzon Street is absolutely at the heart of the HS2 project and will help transform the city and the economy of the wider region. We are looking for a partner to take on the highly complex construction phase, working with us to deliver this logistical and engineering challenge.
“It’s great to see how much interest there is in the competition and we look forward to working with the successful bidder to deliver, what will be a new low-carbon architectural landmark for Birmingham and the UK.”
HS2 worked with WSP and Grimshaw Architects LLP on the design for Curzon Street, which is inspired by the great arched roofs built by the Victorian railway pioneers. The design takes that inspiration into the 21stCentury, ensuring accessibility and a focus on the open space and landscaping around it.
Alongside up to nine high speed trains an hour, passengers will also be able to access the Midland Metro, which runs alongside and underneath the station, while accessible pedestrian routes lead to local bus services, Sprint rapid transit bus services and local rail services from the neighbouring Moor Street station. Cycle parking has also been incorporated, providing space for more than 550 bicycles.
Significant progress has already been made on site. A massive archaeological programme, involving 70 archaeologists, has unearthed the world’s oldest railway roundhouse. Demolitions and ground investigations are preparing the site for construction, and utility diversions are set to begin in the summer.
The Two Stage Design and Build contract will see the winning bidder work closely with HS2 Ltd to develop the detailed design and construction of Curzon Street Station. Contracts are expected to be awarded next year.