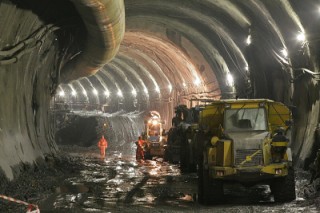 Reports are coming in of a tunnel collapse at 1am on the 6th July, during construction of the US$1bn, 5.5km long Blanka Ring Road Tunnel in Prague, Czech Republic. City spokesman, Jiri Wolf said the collapse near the Ministry of Culture in District 6, has left a crater of some 20m wide by 30m long. An excavator driver and his machine were buried for several hours, but after being rescued and hospitalized his injuries were said to be minimal and he was allowed to go home. No other injuries have been reported. Tunnelling has been stopped and remedial works will last for several days. The cause of the collapse is as yet unknown and an investigation is underway.

The Blanka Tunnel is the largest tunnelling project in the Czech Republic and connects the north-western part of the City Circle Road between the Malovanka and Pelc Tyrolka section.

Contractor Metrostav is constructing the tunnels, and in the NATM sections is placing a shotcrete primary lining with lattice girders, welded mesh and rockbolts. The excavation sequence consists of a top heading, bench and invert. The thickness of the primary lining varies from 200 to 400mm, depending on the NATM excavation support classes and the dimensions of the excavated cross section, which is 119m2 for the double-lane tunnel and 173m2 for the triple-lane tunnel.