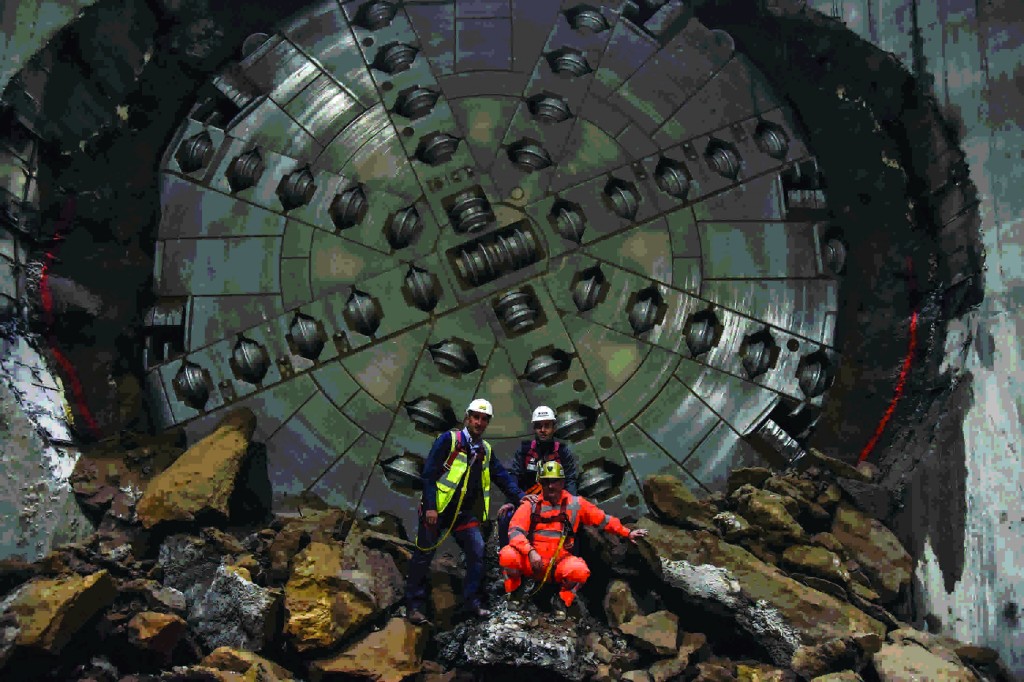 North America’s first Crossover TBM has broken new ground in Mexico City.  At the end of last month, the 8.7m diameter Robbins XRE – a cross between a rock TBM and an EPB – emerged into an intermediate shaft at Túnel Emisor Poniente (TEP) II.
The machine is undergoing some maintenance before continuing on to bore the final 3.2km of tunnel. The customized TBM, for a consortium of Aldesem, Proacon, and Recsa, was chosen based on a number of parameters that included challenging ground conditions below an area to the west of downtown Mexico City.

“The geological profile of the project comprises six different lithologies, among them hard rock such as dacite. To get the best operation in both areas required use of dual mode technology such as the Crossover TBM,” said Enrique del Castillo of contractor Aldesem. The 8.7m diameter Robbins XRE (Crossover between Rock/EPB) is a design that allows for the TBM to effectively bore in both hard rock and mixed ground.

The machine setup includes a canopy drill and positioner for enhanced ground consolidation, as well as gear reducers to adjust torque and RPM based on ground conditions. The TBM, initially launched in hard rock mode, can be operated in EPB mode later on by switching out the belt conveyor with a screw and converting the cutterhead.

The Robbins Crossover machine began its journey in August 2015, and advance rates picked up quickly. Project records were set in January 2016 after the machine achieved a best day of 42.8m and a best week of 185.1m. By mid-March the machine had bored through the first of the contact zones, a 30m wide section of fractured and blocky rock. While the excavation through the contact zone was slow going, progress picked up again in the more competent rock. Final breakthrough is expected in autumn 2016.

Once complete, the 5.8km tunnel will supplement an existing and overtaxed wastewater line built in the 1970s. The deep drainage tunnel will serve to prevent recurrent flooding in Valle Dorado, and will benefit the cities of Cuautital Izcalli, Tlalnepantla, and Atizapan de Zaragoza, an area with a total population of 2.1 million inhabitants.

The News In Brief:

–        The Robbins Crossover machine must travel through andesite rock with bands of tuff, as well as softer ground and fault zones along its 5.8 km (3.6 mi) route.

–        The Robbins machine is undergoing scheduled maintenance before continuing on to bore the final 3.2 km (2.0 mi) of tunnel. Final breakthrough is expected in autumn 2016.