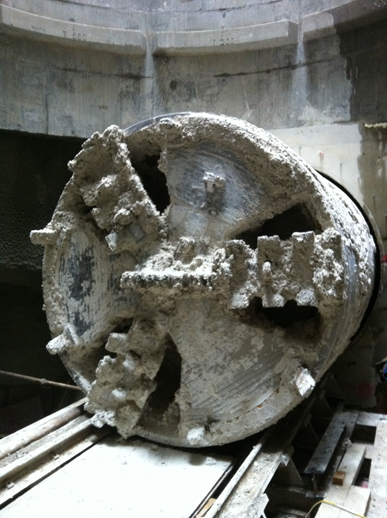 The new sewer tunnel from Brighton Marina to Friars Bay on the UK’s south coast, being constructed as part of Southern Water’s US$480M scheme to bring cleaner seas to Sussex, is now complete following the Lovat 2.4m diameter TBM Alice’s arrival at Portobello on the 22nd June 2011. Alice, named by local schoolchildren, is one of two TBMs that have bored the 11km of tunnel on the scheme. Hollyblue, the second machine finished her final journey between Peacehaven and Friars Bay last month. Alice and Hollyblue, created the majority of the sewer tunnel, which runs from Brighton Marina to Friars Bay, Peacehaven with two pipejack tunnelling machines creating the remainder of the tunnel.

Ben Green, Southern Water’s project manager, said: “Alice’s arrival in late July 2010 marked the start of the tunnelling and within a year we have a created a new sewer running from Brighton Marina to Friars Bay, Peacehaven, with only a few connections left to be made. This is a momentous milestone for the project”.

Alice will now be taken out of the ground and refurbished before going onto her next challenge.

Once complete the wastewater treatment works will treat the 95 million litres of wastewater produced each day by the residents of Peacehaven, Telscombe, Saltdean, Rottingdean, Ovingdean and Brighton and Hove.

Supplier 4Delivery began work in the summer of 2009 and the project is due for completion in 2013. 4Delivery is a consortium comprising Veolia Water, Costain and MWH, and is carrying out a programme of environmental improvement and water quality schemes for Southern Water.