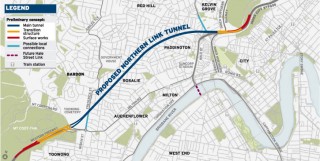 Brisbane City Council has been given state approval to proceed with the US$1.6bn, 4.7km long twin tube Northern Link Tunnel, with the winning bidder for the PPP concession set to be announced next month.

In the running are; Northern Direct, a JV of Bouygues Travaux Publics/Laing O’Rourke/Transfield Services; Transcity, a JV of Acciona/Ghella/BMD; and the Leighton Contractors Pty Limited/Baulderstone/Razel JV.

Construction of the toll road tunnel connecting the Western Freeway and the Inner City Bypass is due to start in December this year for completion in 2014, and will utilize a mix of TBMs, drill and blast and cut and cover construction.

Stirling Hinchliffe, Infrastructure Minister, said 34 conditions had been imposed on the project by Coordinator General, Colin Jensen, after a more than two-year evaluation of the council’s environmental impact statement. These are the most stringent conditions ever imposed on a transport project in Queensland, reflecting issues that arose during design and construction of Brisbane’s Clem7 and Airport Link Tunnels. The main considerations are relating to air quality and rock excavation. Jensen said, “Another major concern raised in the submissions was the air quality levels from the two ventilation outlets. One is proposed at each end of the tunnel. During construction, rock excavated from the tunnels will be transported to Mt Coottha Quarry by a conveyor belt. Any changes to the conveyor route proposed recently by council will be subject to further separate assessment once council has completed its tender process.”

“Conditions governing air emissions from the ventilation outlets will be covered directly by an environmental authority set by the Department of Environment and Resource Management,” concluded Jensen.