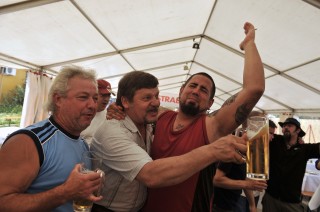 The drinks were on Contractor Strabag last Friday following the final breakthrough of the second 6m diameter Herrenknecht EPBM on Budapest’s US$1.6bn Metro Line 4 Phase 1 project. The event, which followed hot on the heels of the first EPBM breakthrough in late June, marks the completion of TBM operations on the 7.4km of twin tube tunnels.

Strabag is part of the Bamco JV, which has been undertaking the US$260M design and build contract, including the construction of one of the 10 stations along the line (Gellert Station), since February 2006. Although marred by contractual disputes that effectively saw JV partner Vinci ‘leave’ the project last year, delays over land acquisition, and tough ground conditions, the atmosphere at the breakthrough party was jubilant, helped in no small way by the generous free bar and food, and an excellent local band pumping out a vast back catalogue of party tunes (very loudly).

Strabag’s Line 4 Project Manager, Christian Genschel, addressed the crowd saying; “I only came to this project in May last year. At first I was skeptical because of the project’s reputation in the press, but soon I realized I enjoyed working with all of you, although not necessarily everybody in the same way every day!”

The JV will now remove the TBMs from Keleti Station, finish construction of Gellert Station, and complete the four remaining cross passages and concreting works on the project’s NATM crossover structure.

The EPBMs started boring in April 2007, erecting the segmental lining from Kelenföldi Station on the Buda west side of the River Danube, driving through clay up to Fövám Station on the east side of the Danube where the ground changed to mixed sand, gravel and clays. Boring progressed well throughout, with the exception of initial problems with partial collapses at the second station, Tétényi út.

Phase 1, which was conceptually designed by Mott MacDonald, and local companies Fomterv and Uvaterv, is due to open next year.