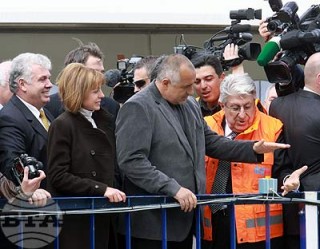 Turkish contractor, Dogus Insaat ve Ticaret’s will construct the 8.43m i.d. tunnel and four stations through soils under the watertable, from the “Nadezda” district through “Maria Louisa” and “Vitosha” boulevards to the “Patriarch Evtimii” boulevard intersection.

PM Borissov, who is also the former Mayor of Sofia, said during the opening ceremony that under his management the City Hall had ‘held back’ US$41M from the capital’s previous cabinet to prevent them from squandering it, instead saving it so a modern subway would be affordable.

The Sofia metro is fully financed, said Borissov, with cash coming from City Hall and the European Union, and very small amount from the State. Borissov also made of point of saying that the EPBM was bespoke for the project, unlike equipment used on schemes for the former government when “contracts were signed without the necessary financing with the only goal for someone to receive a hefty commission.”

The US$20M EPBM is scheduled to advance 9.4m per day at an average depth of 15m. Project client, “Metropolian” EAD says that the machine will work 24hrs/day, as excavation of Line 2 must be completed by July 2011 ready for the Line’s commissioning in September 2012.

Currently design tenders are out for the 19km long, 23 station Sofia Metro Line 3 between the boroughs of Levski and Kniajevo.

Financing is expected from European Union structural funds in the 2014/20 budget.