Watercare’s $1.2bn Central Interceptor project in Auckland has achieved another milestone with the EPBM to be used to bore the 14.7km long tunnel passing its official Factory Acceptance Test (FAT) in Germany 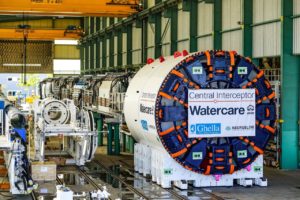 The Central Interceptor is being delivered for Watercare by Ghella Abergeldie JV. The TBM, which has been named ‘Hiwa-i-te-Rangi’ after a Mataariki star, has been assembled at the Herrenknecht factory over 10 months. The TBM is 190m long and is 5.47m in diameter. The machine will now be disassembled before being loaded into containers and put on a ship to travel to Auckland.

We’re really pleased to hear Hiwa-i-te-Rangi is now ready and will be here mid-November. It will begin work on the 14.7km Central Interceptor tunnel early next year.

Meanwhile, excavation of the main shaft at the Māngere site is progressing well and has reached a depth of more than 24m. Excavated soil is being deposited at a former quarry at nearby Puketutu Island (known as Te Motu a Hiaroa to Mana Whenua), which will eventually be returned to the people of Auckland as a park.

Elsewhere, two shafts are under construction at May Rd, Mount Roskill. Work at three other sites has also begun at Keith Hay Park and Haycock Ave, Mt Roskill as well as Dundale Ave, Blockhouse Bay.

Construction teams are undertaking simulated training at the Central Interceptor’s dedicated training centre in readiness for work underground. This includes practicing changing the giant cutter head tools using a special replica TBM, which arrived earlier this year. They’ll also enter and exit a hyperbaric chamber, which is necessary because the Central Interceptor tunnel will reach depths up to 110m, as well as travel underneath the Manukau Harbour.

The Central Interceptor is the biggest wastewater infrastructure project in New Zealand. The tunnel will travel from Grey Lynn to the Māngere Wastewater treatment Plant. It will store as well as convey wastewater and will clear up 80 per cent of wet weather overflows into Auckland waterways.