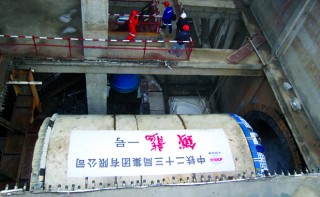 In March 2010, contractors celebrated a city-wide excavation record on the Chengdu Metro, of 457.5m in one month. The 6.26m diameter Robbins EPBM has excavated at rates of up to 24 m per day—faster than any of the 11 other TBMs working on the project. The machine began excavation of Line 2, Lot 18 of the Chengdu Metro in January 2010, as part of a project for the China Railway Construction Corp, Ltd. (CRCC).

By May, the machine had excavated approximately 1,000m of the 2.7km long tunnel, to be bored in two sections. Cutter wear was minimal, with no cutters changed since the start of boring. “These achievements are due to the strong support of field service during assembly, commissioning, maintenance, and excavation,” wrote Mr. Li Quanshe of CRCC.

The EPBM was designed to excavate a matrix of alluvial geology found nowhere else in China, consisting of highly permeable pebbles, sand, and clay. A mixed ground cutterhead, mounted with 17-inch diameter disc cutters and carbide bits, was manufactured specifically to effectively excavate the geology. A foam injection system stabilizes running ground, with each cubic meter of foam mixture able to stabilize about 40 rings of ground.  Subsidence is being intensively monitored and crews are trained to utilize probe drilling and ground consolidation if settlement is detected.

China’s Chengdu Metro will open in three stages, with Line 1 operational by 2010. The 26.7km long Line 1 will provide service between Honghuayan and Shiji Square stations at speeds of 80km/h. The 50.6km long Line 2, for Chengdu Metro LLC, (with 17.6 km of underground tunnels) will include 26 stations between Longquandong and Shiniu areas. Seven lines totaling 274km are planned to be operational by 2035, and will service 13.1 million daily passengers.