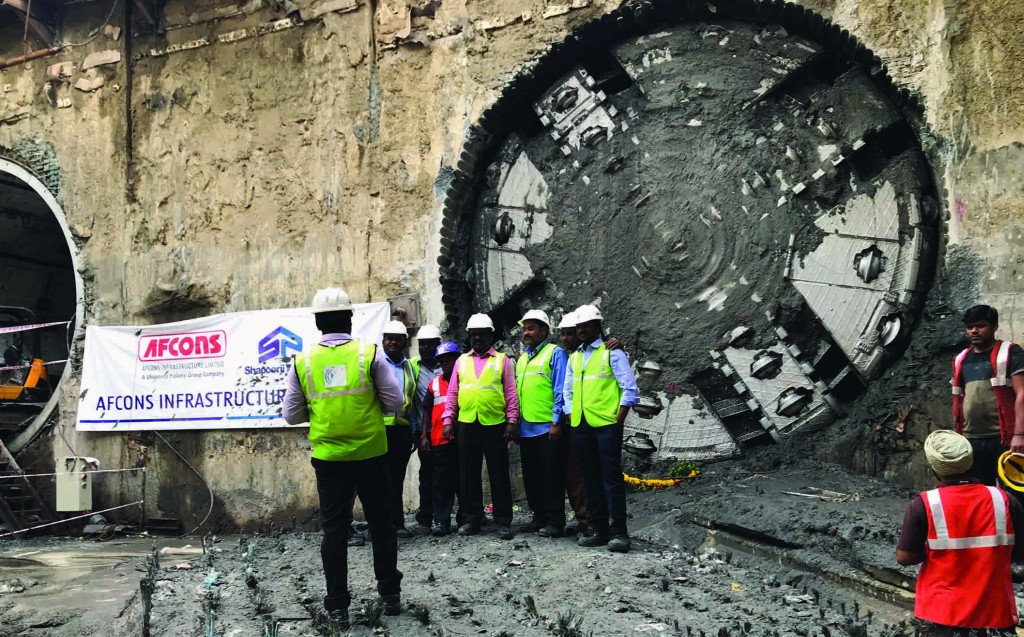 On Tuesday, October 31, 2017, a 6.65m diameter Robbins EPBM broke through on the Chennai Metro for contractor Afcons Infrastructure Ltd.

This is the third bore driven on the project by the EPBM. After completing its original twin tunnels, the EPB was refurbished in preparation to bore its latest 1.8km section. During refurbishment, the inner seal greasing system was changed from auto to manual mode and the foam nozzle system was modified. These changes optimized the machine for excavation in the highly variable mixed face conditions encountered in the first two tunnels.

Mr. Gopal Dey, Afcons Senior Manager said. “For this project, we needed a machine that was specifically tailored to project conditions from soft clay to mixed ground with rock. Robbins EPB TBMs have unique design features that optimize the machine for the geology.”

The EPB was launched on February 3, earlier this year. According to contractor Afcons, the machine faced a major challenge right out of the gate. “When the TBM came out of the launching shaft, a few rings were erected and then the machine had to cross a live railway track, which meant there would be a possibility of ground settlement,” said Afcons Director, Mr. Manivannan. “At this stage, we had to closely monitor TBM face pressure and advance the machine at a uniform rate to ensure proper primary grouting.” The bore’s geology mainly consisted of clayey sand and about 60m of mixed ground.

“We [Afcons] chose this machine for this project due to the underground geology in Chennai, which continuously changes from soil to mixed ground,” said Mr. Dey. “We also liked that Robbins EPB machines are designed with active articulation to allow the machine to turn or steer with ease.” During active articulation, thrust cylinders react evenly against the entire circumference of the tunnel lining, even in a curve—a design that eliminates the problem of tunnel lining deformation. “This feature enabled the machine to negotiate through well-controlled conditions,” added Mr. Manivannan.

With all three tunnels, Robbins Field Service members were on location to assist and support as required. During the course of each bore, Robbins was there to advise Afcons on how best to maneuver through challenging ground and provide instruction for machine operation. The ability of the contractor and manufacturer to work well together, as Robbins and Afcons have throughout their contracts, was critical to the good advance rates. The result was a robust machine that advanced at rates of 80mm per minute in challenging conditions.

This latest tunnel connects multiple stations along the metro line, starting from Washermenpet through to Sir Theagaraya and to Kurukpet. The Chennai Metro Project will provide much needed transportation to a rapidly developing city.