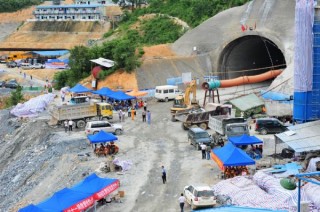 Attempts to rescue 10 miners trapped after Sunday’s collapse of a rail tunnel connecting southwest China’s Nanning and Litang, have been suspended following a further two collapses. All efforts have been stopped and rescuers and their equipment have been evacuated from the tunnel until conditions become safe enough to continue.

Reports of the first further collapse came at 7.27am this morning, from the trapped miners themselves via a telephone. Reports say the phone signal was almost immediately lost. Rescue teams have said that the crown of the tunnel was cracking and beginning to sag. By 10.30am the tunnel had collapsed again leaving a 10-15m cave-in, media reports from China say.

“We are trying to determine whether there is still enough space in the debris. The trapped workers survived at the beginning because Sunday’s collapse left them space,” said a rescuer.

The 10 miners are said to be trapped in an area some 8m long in the 50m long collapsed section of the 800m long tunnel, and were all reported to be in good condition yesterday. The miners were communicating via letters passed through one of five ventilation holes drilled to provide them air.

Rescuers have dug two rescue passages and have managed to supply the trapped men with water, milk, torches, paper and pens.

The rail tunnel is being built by the No. 18 Bureau of the China Railway Group Ltd.