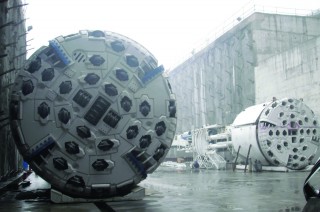 Construction of China’s Chongqing Metro Line 6 is now in full swing following the launch of two Robbins 6.4m diameter hard rock TBMs on the project, firstly in December 2009, and then January this year.

With excavation of 12km of twin tube tunnel ahead, the initial turn of the leading machine’s cutterhead into the alignment’s mostly 12-50Mpa sandstone signified the debut performance of a hard rock TBM under the world’s most densely populated city.

Currently the TBMs have progressed an impressive 800m and 420m respectively, all the more respectable when considering the low covers of down to 10m, and the ground support requirements of rock bolts, ring beams every 750mm, wire meshing and shotcrete.

The ground support is particularly difficult given the tunnel alignment that includes several curves with radii as small as 400m. “Installing ring beams throughout the tunnel and rock bolting while negotiating tight vertical and horizontal curves at good production rates is a challenge not to be underestimated,” said Steve Chorley, Robbins International Field Service Manager.

Specially designed back-up systems are also being used to deal with any water inflows during excavation. The back-ups are raised 1.2m above the invert on a steel structure, allowing room for double-track muck cars to remove muck and transport ground support materials behind the machine. Any groundwater flows under the machine through the tunnel invert.

During tunnelling, a specially designed Robbins walking cradle system allows the TBMs to be moved forward through the Line’s eight cut and cover station sites. The system minimizes stoppage time associated with attaching transportation dollies or other walking equipment, and allows the machines to instead move directly onto the cradle once entering the station.

The tunnels are the first new lines to be excavated for the city’s metro system, which is planned to include a network of nine rail routes with approximately 30km of tunnels excavated by both TBM and drill and blast.

Currently the city’s 35M inhabitants rely on bus networks for public transport, but due to the hilly topography of the city, and environmental considerations the underground is being exploited as a sustainable solution to the metropolis’ infrastructure needs.