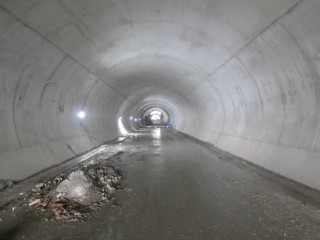 On May 26, the Toronto Port Authority (TPA) announced that the completion of the concrete liner in the Pedestrian Tunnel at Billy Bishop Toronto City Airport (BBTCA), moving the project one significant step closer to providing an efficient and convenient access route for travellers to Toronto’s downtown airport. With the completion of the liner, the tunnel will now move into the mechanical and electrical installation phase before final finishes are put in place this winter.

Excavation began in early 2012 on the mainland and island shafts. Once the shafts were dug, two purpose-built, Canadian-made tunnel boring machines dubbed ‘Chip’ and ‘Dale’ were launched to bore the seven interlocking “tunnel drifts,” forming the unique arched crown design of the main tunnel (see full article on the project in the Oct/Nov ’13 digital edition of NATJ). Three of the tunnel drifts were built to include new City Of Toronto sanitary and water mains, which has helped save Toronto taxpayers an estimated $10 million in duplicated construction efforts. Excavation of the tunnel was completed in October 2013, and waterproofing and reinforcing steel layers were installed.

“Just six months ago, we were in the process of carving through rock. Today, with the concrete ceiling, walls and flooring complete, the tunnel is quickly transforming into what will be a first-class piece of infrastructure Torontonians can be proud of,” said Geoffrey Wilson, TPA President and CEO. “The pedestrian walkway is about making the Billy Bishop Toronto City Airport traveller experience even better and will allow people to get to and from the airport when they want and how they want. It is also an important component of our traffic management strategy as it evens out the flow of passengers and alleviates the congestion stemming from travellers arriving and departing in waves according to the ferry schedule.” 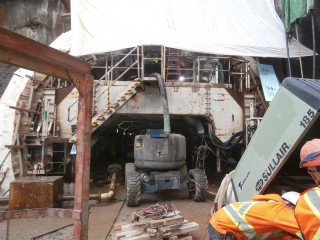 The concrete liner encases the 550-foot horizontal tunnel expanse that runs under the Western Gap connecting the mainland to the airport. The concrete was poured in 16 sections by a 110-tonne, 12-metre, arch-shaped hydraulic machine that forms an artificial surface onto which the concrete is pumped to create the ceiling and walls. On average, each section takes two days to complete leaving a solid concrete liner over the rock. Approximately 2,000 cubic metres of concrete was poured to create the liner.

When it opens, the pedestrian tunnel will have four moving sidewalks travelling at 2.3 kilometres per hour. From a bank of six elevators on the mainland side, travellers will go 100-feet down to access the tunnel and travel along the passageway to escalators which take travellers to the airport’s check-in area. The complete journey will take less than six minutes, and will dramatically improve passenger flows.

Next phases of the tunnel project will include construction of the connecting terminal structures, installation of the moving walkways, escalators and elevators and landscaping, as well as electrical, mechanical and final finishing work.