Singapore’s Land Transport Authority (LTA) has marked the start of construction of the 50km long, fully underground Cross Island Line (CRL) Phase 1 with a ground-breaking ceremony officiated by Minister for Transport S Iswaran at the site of the future CRL Bright Hill station.

The first phase – CRL Phase 1 – spans 29km and comprises 12 stations from Aviation Park to Bright Hill. CRL Phase 1 will be linked to East-West Line at Pasir Ris station, North-East Line at Hougang station, North-South Line at Ang Mo Kio station and Thomson-East Coast Line at Bright Hill station. LTA is progressively calling tenders for CRL Phase 2 which comprises six stations from Turf City to Jurong Lake District, while engineering studies are ongoing for the third phase. Construction for CRL Phase 1 is expected to be completed by 2030.

Various technologies have been adopted to enhance construction efficiency and safety at CRL. These include the use of Virtual Reality and Augmented Reality tools to enhance capabilities and facilitate coordination. Productivity is further increased through platforms such computer simulations of different operating scenarios at the Changi East Depot.

Large-diameter TBMs will be used to construct various stretches of tunnels between the CRL stations such as between Aviation Park station and Loyang station. The 12.6m large-diameter TBMs will only have to bore through the ground once for the construction of the tunnel with two tracks eventually housed in it. This will be the largest TBM to be deployed on an LTA rail project and it is expected to increase work productivity and reduce manpower requirements.

The CRL will be Singapore’s eighth and longest fully-underground MRT line when fully completed. It will serve the existing and future developments in the eastern, western and north-eastern corridors, linking major hubs such as the Jurong Lake District, Punggol Digital District and Changi. The projected daily ridership of the entire CRL is more than 600,000 in the initial years from 2030, increasing to over 1 million in the longer term. 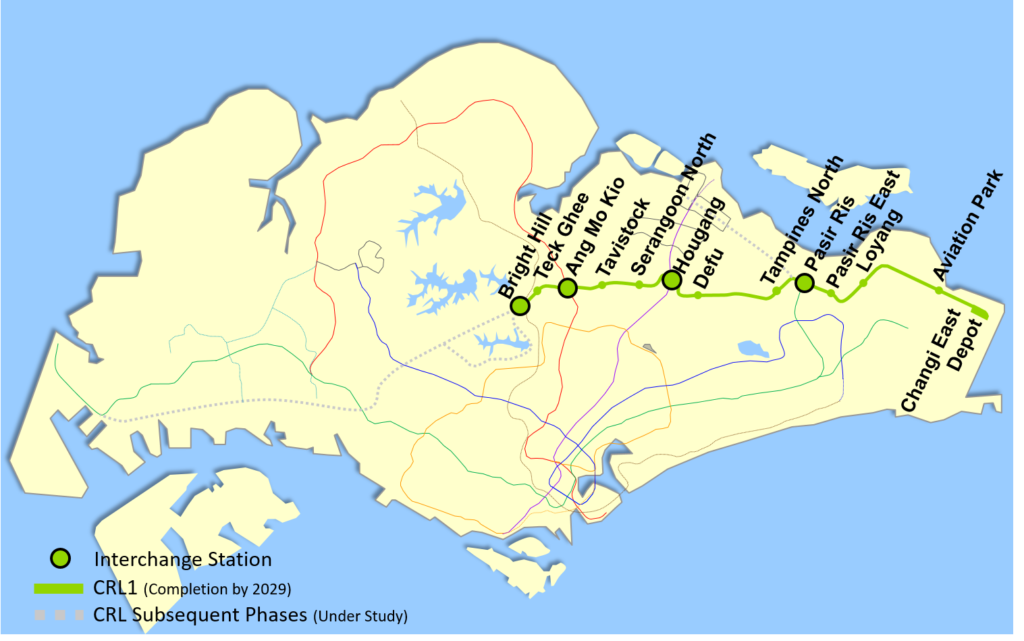