A further consultation phase has begun into Highways England’s proposed 14.3-mile Lower Thames Crossing, connecting Kent, Thurrock and Essex, that will give people the chance to have their say on the latest changes to the multi-billion pound project. The Lower Thames Crossing includes the world’s third-widest bored twin-tunnels, planned to be constructed using two 16m+ diameter TBMs. 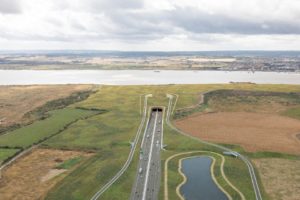 The changes have been made after detailed analysis of the 29,000 responses received during the last consultation held in 2018, and new technical information following surveys and ground investigations. The updates to the design include extending the southern tunnel entrance (in Gravesend) 350m south to move the road away from properties in Chalk and reduce impact on protected bird habitats in the Ramsar Marshes and the Thames Estuary.

Once the consultation closes in March, Highways England will analyse the new responses ahead of finalising its plans to seek planning consent for the project, through submitting a Development Consent Order (DCO).

As part of the DCO application, Highways England will submit a Consultation Report, explaining how the issues raised during both consultations were considered and responded to.