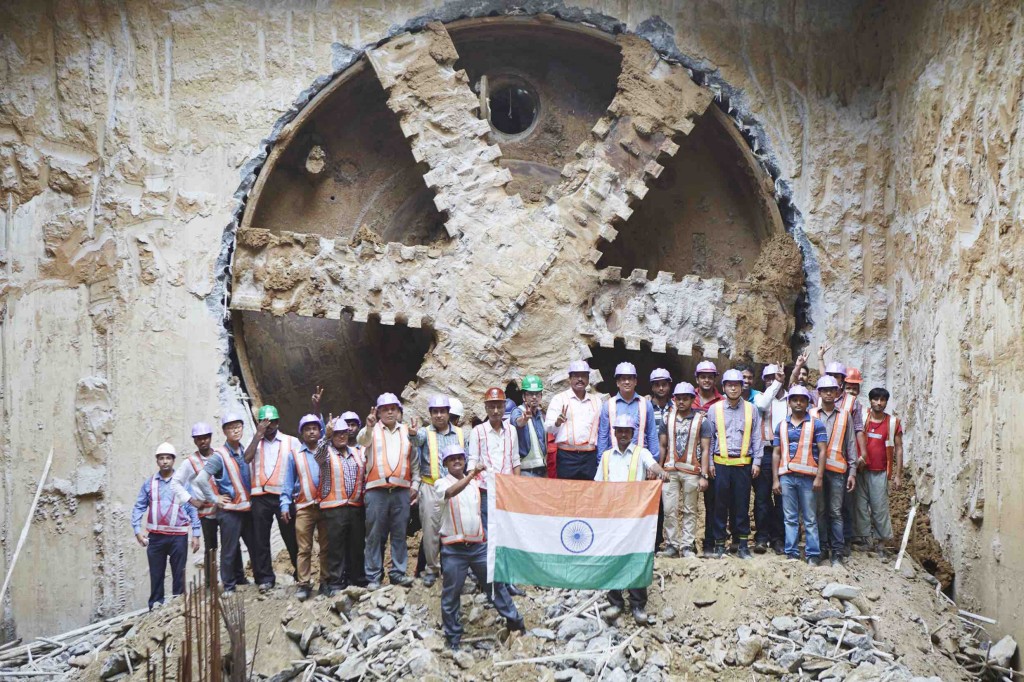 Late August saw the breakthrough of the TERRATEC TBM S36 at Palam Station, 27 days after its twin S37 did the same, completing the last drives on Contract CC-34 of Delhi Metro Phase-III.

With this, the Contractor, a Joint Venture of Hindustan Construction Company Ltd. of India and Samsung Engineering & Construction Group of Korea, has bored a total of 3.6km by using TERRATEC TBMs.

The breakthrough ceremony was held in presence of the Project Owner, Delhi Metro Railway Corporation, and the Contractor, . “We are thankful to all our sub-contractors and equipment suppliers, especially TERRATEC, as these TBMs have excavated very smoothly and this has helped to complete the works ahead the planned schedule” Mr. Raman Kapil, JV’s Project Director, mentioned during his opening speech.

The Contractor selected TERRATEC to design and manufacture two Ø6.52m EPBMs with a traditional soil configuration, equipped with a Spoke-Type Cutter Head with a 57% opening ratio. The machines were nicknamed “Jantar” and “Mantar” to remember the Indian gigantic instrument created in the 18th Century to measure the time of the day.

The boring of the first stretch started in August 2014 from Vikaspuri Shaft and broke through near Kerala school, where a train cross-over has been planned for this Metro Line, completing a short drive of 219m. From there both TBMs were dragged 110m through the cross-over area to start boring a second drive of 354m to Janakpuri Station. On this drive, The TBMs passed beneath the existing Janakpuri elevated metro station. The distance between the tunnel wall and foundation piles of the existing metro station was only 3m.

All the stretch between Vikaspuri and Janakpuri stations were under moderate water pressures of up to 2bar. The geology was composed of very wet silty clay & sandy soil typical of Delhi. Both TBMs passed underneath residential areas keeping the settlement within less than one centimeter.

The final stretch of the project for TERRATEC TBMs went from Dashrathpuri to Palam Station. The twin 1224m long drives passed through very dry soil, for what the foam injection system on the TBM CutterHead was appropriately used for conditioning of the muck. The TBMs went beneath the Palam flyover where the distance between pillars and TBMs was less than 4m. On this last stretch, the Contractor kept steady weekly advances up to 120m per week, what allowed the tunnelling work to be completed for the original planned time.

TERRATEC has deployed a total of eight TBMs which so far have excavated over 12km of metro tunnels for different Contracts on Delhi Metro Phase III. All tunnelling works will be completed by the beginning of 2016.