Auckland’s $4.4bn City Rail Link (CRL) has taken a huge step forward following the signing of a contract with the Link Alliance JV to build the project’s main stations-and-tunnels programme. The 3.45km of twin tunnels will be built at depths of up to 42m below the city centre using a 7m diameter TBM, with roadheaders and cut and cover sections for the connections. 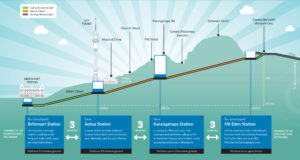 Signing the Project Alliance Agreement  (PAA) formally clears the way for the three construction companies and three design companies in the Link Alliance, together with CRL Ltd, to start work building two new inner-city underground stations, upgrading the existing Mt Eden station, and completing tunnel  construction.It is the single biggest programme of work for CRL, known as the C3 contract.

Mr Twyford says the signing is significant  for Auckland and for New Zealand.

“Given the competition world-wide to build infrastructure, the whole country can take pride in the fact that such a high calibre of international companies want to come here and help build a better future for New Zealand,” Mr Twyford says.

Mr Goff describes CRL as a gamechanger for Auckland.

“It will double the capacity of our rail network, reduce travel times into and through the central city, and help take cars off the roads, as well as driving investment in our region. The signing of this agreement will help ensure the delivery of the world-class transport system our city needs.

The signing follows CRL Ltd’s announcements last April of the Link Alliance as its preferred bidder, and details of a $1bn increase in the project to $4.4bn after a rigorous and comprehensive review of project costs. The project’s two sponsors – The Crown and Auckland Council – subsequently approved CRL Ltd’s request for additional funding.

To ensure project momentum was not lost, the Link Alliance began work on a $75M Early Works Contract while commercial and legal negotiations continued to finalise the PAA.

Construction of three smaller sections of the project at lower Queen Street/Britomart and north Albert Street in the city centre and utility-based work at Mt Eden are already underway.

The project is scheduled for operation in 2024.