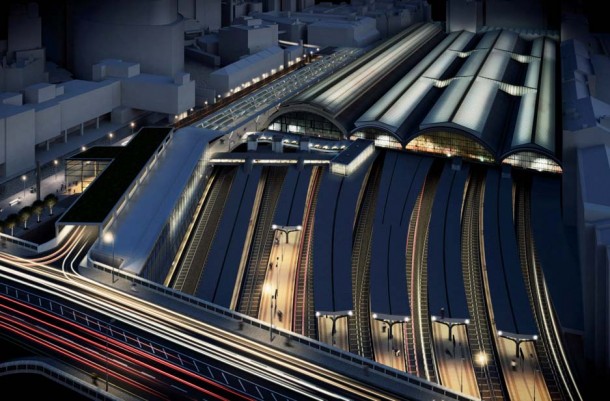 Crossrail today announced its intention to award the first of the main construction contracts for the new central London stations. The US$400M contract C405 for Paddington station will be awarded to the Costain Skanska JV. In line with European procurement rules the award is subject to a ten-day standstill period.

Intensive construction for Paddington Crossrail station will get underway later this year. The new station will take the form of a 260m long, 25m wide and 23m deep underground box located directly under Departures Road and Eastbourne Terrace.

Enabling works to prepare Paddington for the construction of the new Crossrail station began in August 2010. Since then, numerous utilities have been relocated away from the site of the new station box. Moving the utilities will protect services, such as power and water, during Crossrail’s construction and make them easier to access in the future.

Andy Mitchell, Crossrail Programme Director said: “Crossrail has reached a further important milestone with the award of the first main construction contract for the central London stations. The tendering process for the six stations has generated a huge amount of interest from the construction industry with very competitive bids received for the Paddington contract. The main construction contracts for Farringdon and Whitechapel Crossrail stations will be the next to be awarded in late 2011. The remaining contracts for Bond Street, Tottenham Court Road and Liverpool Street will all be awarded by spring 2012.”

Crossrail, Network Rail and Transport for London are also working together on the Paddington Integrated Project to build a new Hammersmith & City line station. The new station will ease over-crowding and provide space for future growth in passenger numbers. Passengers to the new station will benefit from a new canal side station entrance from Paddington Basin and a new pedestrian entrance from the canal towpath to Paddington mainline station.

The Paddington Integrated Project will also build a new purpose-built taxi rank on the northern side of Paddington station. The new taxi rank will have greater capacity than the current facilities on Departures Road and will decrease the number of taxis queuing on the streets around the station. Passengers will be able to access the mainline station from the taxi deck by lifts and escalators.

Crossrail will boost London’s rail-based capacity by 10 per cent, delivering new journey opportunities, faster journey times and up to 24 trains per hour between Paddington and Whitechapel during the peak.