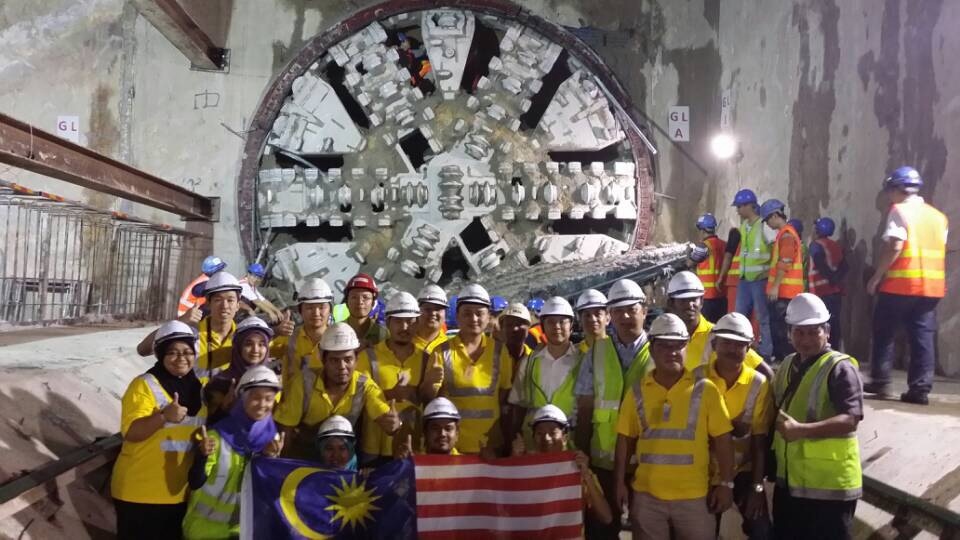 CTE has announced CR51, the second EPB machine supplied by CREG to the Klang Valley MRT Project in Kuala Lumpur Malaysia has completed the first stage of its drive.  It broke through into KL Sentral station on Thursday 16 January 2014, ahead of schedule, after completing the 1.4km drive.  It was launched on 12 July 2013 from the launch portal at Semantan and has achieved advance rates of up to 330m per month through the Kenny Hill formations.

This follows the first successful breakthrough of its sister machine CR50 just before Christmas.  Both machines will continue their drive from KL Sentral station to Pasar Seni Station, approximately 1.2km away, when the station construction is complete in a couple of months time.  This will give the contractor Nan Yang Tunnel Engineering Sdn Bhd time to carry out maintenance on the machines whilst waiting in the station cavern. The TBMs were ordered by MMC-Gamuda JV for use on the project.

CTE Ltd were set up in 2013 in order to market these CREG machines internationally and provide an experienced and international source for these high quality machines.  They are able to supply slurry tunnelling machines, – CREG recently received an order for Slurry machines for the Wuhan Metro – and Hard Rock tunnelling machines, based on the WIRTH technology which has recently been acquired a well as EPB machines for which over 140 orders have been received in the last 4 years.  CTE Ltd, are also able to supply full after sale support, including on-site field service using both Chinese and ex-pat skilled technicians.