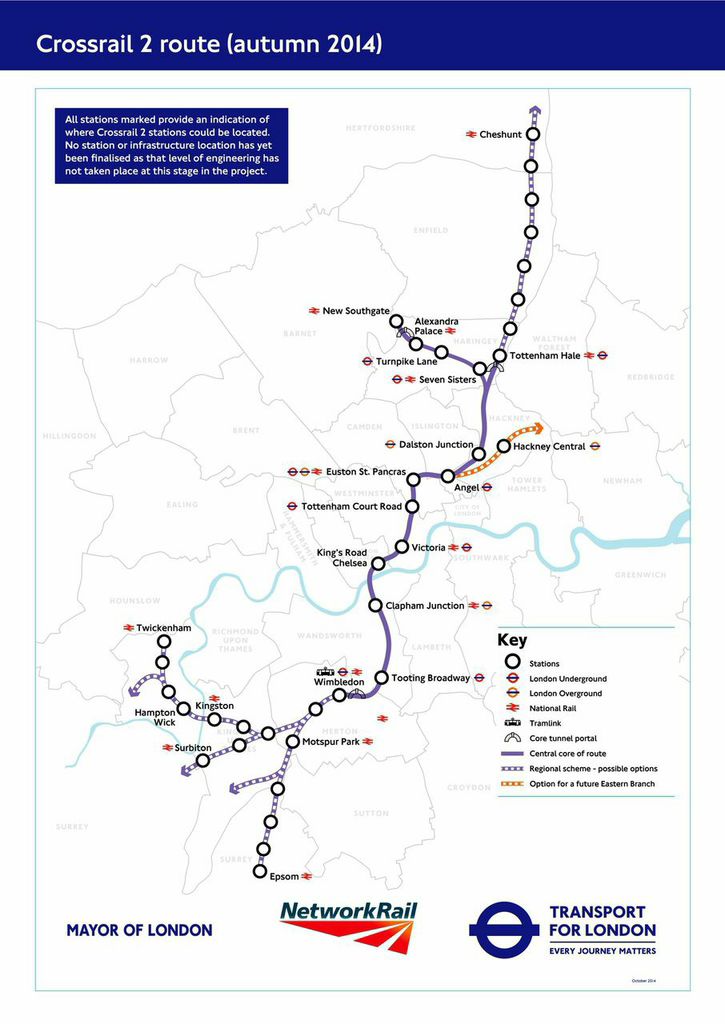 The Mayor of London has set out the case for Crossrail 2, the £20bn high frequency, high capacity rail line linking south west and north east London and at the same time announced its preferred route that includes 36km of tunnels.

In a keynote speech at the ‘City Age’ conference, the Mayor argued that even with the current Tube modernisation programme and the delivery of Crossrail 1, Crossrail 2 is needed to provide vital new capacity on the transport network to cope with London’s forecast population growth, which is expected to reach 10 million by 2030 and 11.3m by 2050.

The arrival of High Speed 2 in the early 2030s will result in particular pressure on the London Underground network, with potential for 30 minutes of queues at Euston to access the Victoria Line in the morning peak without Crossrail 2. Crossrail 2 is also designed to address rail capacity constraints in the south-west, as well as providing vital new connections across the capital to help to support economic growth, providing opportunities for thousands of new jobs and homes.

The Mayor said he was confident that, as with Crossrail 1, London could in the right circumstances contribute well over half the cost of Crossrail 2, reducing the demand on the UK taxpayer as a whole.

A recent consultation to finesse the route showed strong support for the scheme with over 80 per cent expressing support. On the options consulted, the majority of respondents support an extension from Alexandra Palace to New Southgate. There was also strong support for a station at Kings Road, Chelsea, as well as support for two potential station options in Hackney – Hackney Central and Dalston Junction. Based on the consultation responses, TfL and Network Rail have now identified a preferred route for safeguarding, with a north-east alignment via Dalston, but with a safeguarded spur to Hackney Central that could be extended further eastwards at a later date. The plans are to be lodged with Government. This ‘regional route’ would travel down into Surrey and up into Hertfordshire (see map in notes to editors).

Michele Dix, TfL’s Managing Director for Planning, said: “The results of the second consultation held earlier this year showed widespread support for the new rail link. We need to continue to move forward with this scheme to identify funding options and safeguard the route, which will benefit London and beyond. Working collaboratively with Network Rail the next stage of work will look at the route and stations in more detail, engaging further with the local authorities, communities and other key stakeholders along the route.”

Network Rail’s strategy and planning director, Paul Harwood, said: “London’s railways are already the busiest and most congested in the country, with many main lines operating at, or close to, capacity. Working jointly with TfL we must press on with schemes such as Crossrail 2 so that public transport continues to support and drive economic growth in the capital and across the south east.”

Working jointly to TfL and DfT consultants PricewaterhouseCoopers (PwC) are undertaking a funding and finance feasibility study. PwC’s report examines a range of funding options, and will be published before the Autumn Statement. The Mayor and TfL believe the wider UK economic and transport benefits also support the case for a Government contribution to the cost.

The Department for Transport (DfT) will consult on proposed changes to the safeguarding, updating the previously safeguarded Chelsea – Hackney line, which dates back to 1991. The consultation will engage with the relevant local planning authorities and will also inform occupiers whose land and property is within 200 metres of land that may be needed in the future. Subject to the outcome of the consultation process, the Secretary of State will issue a Safeguarding Direction for Crossrail 2 in 2015.

Subject to this, the next steps for Crossrail 2 will be a consultation on a single preferred route option and station/worksite locations from September 2015. More detailed design will then be needed and an Application for Powers to build could take place in 2017 with the railway being operational by 2030.