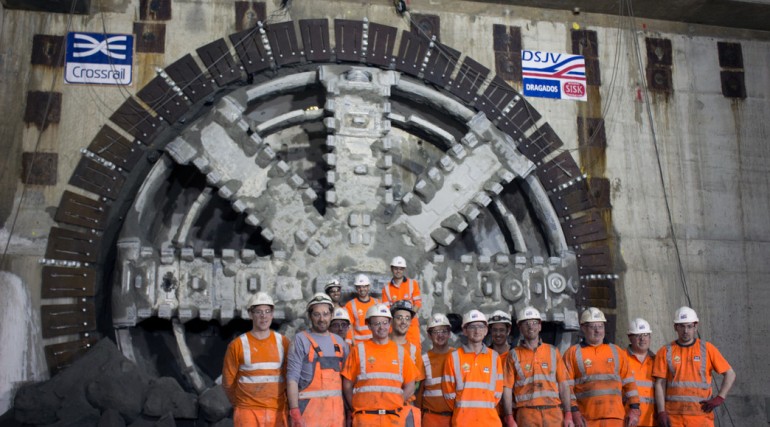 London’s Crossrail project has celebrated its biggest milestone so far with today’s TBMs breakthrough into the new Canary Wharf station box. At an event, Secretary of State for Transport Patrick McLoughlin, Mayor of London Boris Johnson, Crossrail Chief Executive Andrew Wolstenholme and selected guests visited the new Canary Wharf station to view tunnelling machine Elizabeth and the huge progress made on the Crossrail project so far.

Crossrail’s eastern tunnelling machines, named Elizabeth and Victoria, were launched from the Limmo site near Canning Town towards the end of last year to create 8.3km of tunnels from east London to Farringdon – Crossrail’s longest tunnel section. A marathon-equivalent 42km section of tunnels beneath central London will be built in total for Crossrail.

Over the past 6 months, both machines have been working round the clock to create the first section of new tunnels beneath the River Lea and east London towards the new Canary Wharf Crossrail station. Tunnelling machine Elizabeth was the first to arrive and has now broken through into the huge Canary Wharf station box 28m underground.

Secretary of State for Transport Patrick McLoughlin said: “This Government knows that by investing in transport projects like Crossrail we are investing in Britain. Over the past few years Crossrail has let contracts worth more than £6bn, more than half going to small and medium-sized businesses, which are supporting jobs across the country. Furthermore, through innovative schemes like the Tunnelling and Underground Construction Academy, Crossrail is providing thousands of people with new skills that will not only help transform the capital’s transport network but will allow this country to compete on a global stage for years to come.”

The Mayor of London, Boris Johnson, said: “Many thought it would never happen, it seemed almost unimaginable. But now, with the arrival of this gigantic tunnelling machine in the heart of Canary Wharf, grubby with mud and rubble, we can be in no doubt it’s on its way. This new railway is adding vital new capacity to our transport network and creating thousands of jobs all over the UK. It is the perfect example of how investment in London benefits the entire country.”

Crossrail Chief Executive Andrew Wolstenholme said: “The Canary Wharf tunnelling breakthrough is our biggest milestone so far and a symbolic moment that shows the scale of the essential new transport links Crossrail is delivering. We are making good progress in building world-class new stations and a marathon of tunnels beneath London with the entire Crossrail project now more than a third complete. We are on track to deliver Europe’s biggest construction project on time and on budget.”

The new Canary Wharf Crossrail station box has been designed and built by Canary Wharf Group who are also delivering a four-storey retail development above the ticket hall and platform levels. The retail development will be topped by a roof top garden, community facility and restaurant semi-covered by a striking Foster-designed timber lattice roof.

Canary Wharf Group Chairman and Chief Executive Officer Sir George Iacobescu said: “We are very proud of the role Canary Wharf Group played delivering the Canary Wharf Crossrail station well ahead of schedule, ready for the tunnel boring machines to breakthrough. Four years after construction of Crossrail began here at Canary Wharf, the breakthrough represents a large and tangible step towards a new world-class rail line, set to benefit the whole of London through reduced travel times and much enhanced capacity and resilience.”

Tunnelling machine Elizabeth will now undergo maintenance inside the Canary Wharf station box before resuming tunnelling towards central London. Sister machine Victoria is due to breakthrough into the station in the next few weeks.

Crossrail’s construction commenced on 15 May 2009 with the start of work on Canary Wharf station, with tunnelling work starting in May 2012. The western tunnelling machines Phyllis and Ada have now reached Tottenham Court Road and Bond Street respectively. In south-east London, tunnelling machine Sophia has reached the Woolwich station box with sister machine Mary now underway from Plumstead.

Crossrail is moving into the peak of construction between now and 2015. The entire project is now more than one-third complete and progress made to-date includes:

Key milestones coming up on the Crossrail project include:

When Crossrail opens in 2018, it will increase London’s rail-based transport network capacity by 10 per cent and dramatically cut journey times across the city. Crossrail will be fully integrated as part of the TfL network providing a fast, frequent service linking the east and west and relieving congestion on some of the busiest Tube lines.