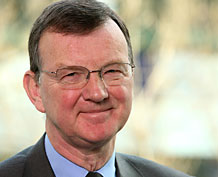 Current Non-Executive Board member, Heather Rabbatts CBE, has been re-appointed for a further three-year term from 13 August 2011.

Patrick Crawford will step-down from the Board when his current three-year term expires on 31 July 2011.

Rob Holden CBE stepped down as Crossrail Chief Executive and member of the Crossrail Board on 10 July 2011.

Crossrail Chairman Terry Morgan said, “Crossrail is now quickly advancing towards the start of intensive construction. All the major tunnelling contracts have been awarded, the first of the main construction contracts for the central London stations has been let, work is underway to manufacture the tunnel boring machines and the Tunnelling and Underground Construction Academy is nearing completion. Now is therefore the right time to further strengthen the Crossrail Board.

“I’m delighted that Terry Hill will be joining the Board. Terry has significant construction industry experience having led one of the UK’s leading engineering companies and will bring invaluable expertise in major transport infrastructure delivery.”