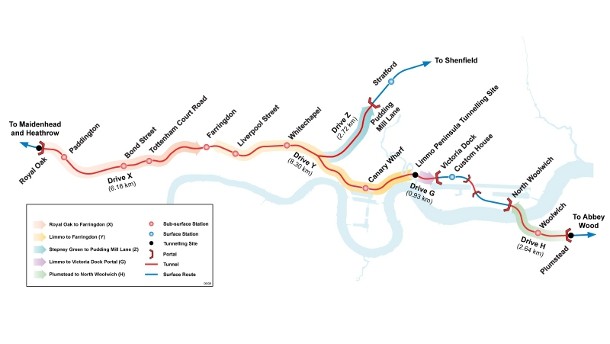 Crossrail Limited today announced its intention to award the major tunnel contracts for Europe’s largest infrastructure project. The winners are:

In line with European procurement requirements, there now follows a minimum ten day stand-still period before the award of contracts can be confirmed.

The contracts, worth in the region of US$1.97bn, will deliver the construction of 18km of twin-bore tunnels underneath central London. Nearly 21km of twin-bore tunnel will be constructed for Crossrail. Tunnelling activity will commence in late 2011 with the first TBM starting out on its journey in spring 2012.

The contracts being awarded today are the first of nearly thirty major contracts that will be awarded by Crossrail over the next eighteen months. A further series of tunnelling contracts will be awarded in 2011 including the Thames Tunnel between Plumstead and Woolwich and remaining contracts for tunnel portals and station platform tunnels.

Rob Holden, Crossrail Chief Executive said: “Crossrail has now reached a very significant milestone with the award of the main tunnel contracts. The value of the contracts, combined with the length of tunnel to be constructed, is on a scale not seen in the UK since the Jubilee Line Extension or the Channel Tunnel Rail Link. Tunnelling activity will get underway in late 2011.

“Significant competition in the construction industry for Crossrail work has delivered highly competitive bids. Over £1bn in savings to Crossrail’s construction costs have been identified to-date in part due to a more efficient construction timetable and these contract awards will help secure these savings. Crossrail will award a further series of tunnel construction contracts in 2011 including the new Thames Tunnel between North Woolwich and Plumstead.

“I would like to take this opportunity to thank all of the companies and consortia who participated in these tunnel bids. They each committed a huge amount of resource and we look forward to working with the winners to further develop their ideas with ours to deliver Crossrail in the most efficient and cost-effective way.”

Rail Minister Theresa Villiers said: “Today we take an important step forward in one of Europe’s biggest infrastructure projects. These tunnels – stretching 13 miles under the city – will help boost rail capacity across London by 10 per cent, relieving overcrowding on other hard-pressed services.

“Crossrail is a critical project for this country which has the potential to generate up to £50bn in wider economic benefits for UK GDP and allow the creation of tens of thousands of jobs. Coming fast on the heels of an announcement for around 600 new Crossrail carriages, today is a major milestone in a scheme that will transform journeys across the South East.”

Kulveer Ranger, Mayor of London’s transport advisor said: “Today London is another step closer to making this all important railway a reality. With these contracts in place we can begin burrowing beneath the city’s streets to forge the line which will make zipping from east to west even quicker and easier for Londoners, commuters and visitors.”

As announced in the Comprehensive Spending Review, a more efficient construction timetable means that Crossrail’s central section will now be delivered in 2018 rather than 2017. It is expected that Crossrail services will commence on the central section by the end of 2018 followed by a phased introduction of services along the rest of the Crossrail route.

In spring 2012, the first two tunnel boring machines will start on their journey from Royal Oak towards Farringdon. This will be followed later in 2012 by the launch of two further tunnel boring machines in Docklands that will head towards Farringdon under central London. Further shorter tunnel drives will take place in the Royal Docks and east London.

Tunnelling teams will work around the clock to complete the tunnels for Europe’s largest infrastructure project with thousands of others employed to upgrade the existing rail network and build major new stations along the central section of the route.

To construct the 21km of twin-bore tunnel required for Crossrail, seven TBMs will be used and will undertake ten individual tunnel drives and construct the 6m diameter tunnels. Each TBM will be up to 120m in length.

The Western and Eastern running tunnels will have tunnel portals at Royal Oak, Pudding Mill Lane and Victoria Dock. The tunnel boring machines or TBMs will commence their eastbound journey under London from Royal Oak and westbound from the Royal Docks. Construction of the tunnel portal at Royal Oak is now underway.

The TBMs will be purchased by the main tunnels contractors from European manufacturers. There are no UK-based companies that manufacture TBMs.

Construction is also underway on the new Tunnelling and Underground Construction Academy in east London. It will provide training on the key skills required to work in tunnel excavation and underground construction and aims to address the shortage of people with the necessary skills to work on Crossrail and other tunnelling projects across the UK.