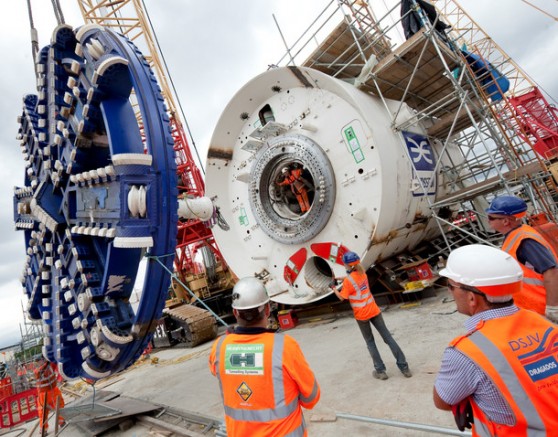 Crossrail workers have now reached the temporary bottom of the two huge launch shafts at Limmo Peninsular in London where the eastern drive TBMs will be lowered into ahead of tunnelling commencing this winter. The larger of the two shafts is 30m in diameter and will be 44m deep when completed. Construction has now commenced on two mined tunnels that will connect the two shafts.

Assembly of Crossrail’s third TBM, Elizabeth, is now well underway with the large blue cutterhead installed earlier this week. During the coming months, the 150m machine will be fully assembled and tested before being lowered in sections into the two shafts.

Crossrail’s eastern tunnels will run for 8.3km from Docklands to Farringdon where they will join with the western tunnels from Paddington. When complete, Crossrail will transform rail transport in east London with areas such as Whitechapel, Ilford and Romford gaining direct links to the capital’s major employment areas.

Construction of a 100 x 9m muck pit has also begun this week. The pit will store excavated material when the tide is too low or there is no ship at the jetty.

Crossrail’s Eastern Tunnels Project Manager Peter Main said: “We are now gearing up for the start of Crossrail tunnelling in east London. Work to construct two large launch shafts is now complete with assembly of the first of our tunnel boring machines now well underway. We understand how critical it is to limit the impact of Crossrail’s construction on local communities and have planned to transport the excavated material from the eastern tunnels by boat from Instone Wharf, removing the need for more than 30,000 lorry journeys in east London. We will also deliver 120,000 concrete tunnel segments by boat from Chatham Dockyard to further reduce our local impact.”

Excavated material will be extracted from the eastern tunnels via a high angle conveyer, traveling up the shaft and under the Lower Lee Crossing to the new jetty at Instone Wharf. The material will then be loaded directly onto ships and transported to Wallasea Island in Essex where it be used to create a new 1,500 acre RSPB nature reserve.