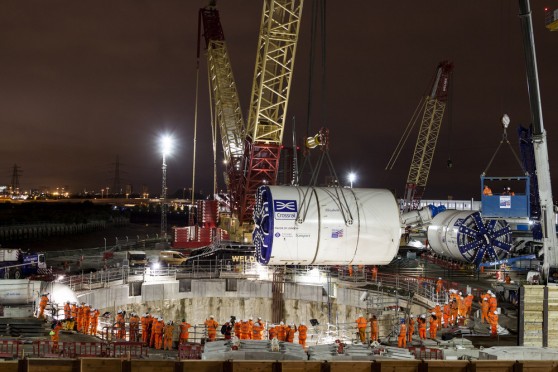 Crossrail has marked another major milestone in the construction of London’s new rail line with the lowering of the first 7.18m diameter Herrenknecht EPBM to work on C305, the £500M Eastern Tunnel section being constructed by the Dragados/Sisk JV. Elizabeth was lowered into a 40m deep shaft in east London last night (Thursday) and is being prepared for launch on her 8.3km journey to Farringdon.

The team at Limmo Peninsula, adjacent to Canning Town station, will shortly repeat the operation with sister machine, Victoria which will bore the parallel tube.

Elizabeth will start tunnelling later this year, travelling under the River Lea towards Canary Wharf. Work has started to prepare Crossrail’s Canary Wharf station to receive Elizabeth, with workers breaking out the hard concrete at the tunnel eyes to allow the machines to easily enter the station next year.

Both tunnelling machines will receive maintenance while in the large station box, before continuing their journeys toward Whitechapel, Liverpool Street and Farringdon.

The Mayor of London, Boris Johnson, said: “The transformational force of Crossrail is now coming ever nearer to central London. With every twist of these giant boring machines we are unleashing the huge economic opportunities stemming from this ambitious infrastructure project. Furthermore, the construction of Crossrail’s eastern section is demonstrating London’s world-class engineering expertise and providing thousands of technical training and job opportunities.”

Andrew Wolstenholme, Crossrail’s Chief Executive said: “This is a significant milestone for Crossrail’s progress in east London. Elizabeth and Victoria will construct Crossrail’s longest tunnel section – 8.3km between Canning Town and Farringdon. When Crossrail is completed it will dramatically improve transport in east London and bring places like Custom House and Abbey Wood to within 20 minutes of London’s major employment areas.”

The 1,350 tonne crane took weeks to assemble and includes heavy duty equipment to carry Elizabeth and Victoria on their descent into the enormous main shaft built at the site.

After both machines and their gantries are safely in the shaft, a large conveyer system will be constructed to take the earth from the bottom of the shaft onto nearby ships. The two machines will use large shove frames to push themselves forward into the earth.

Works are also being completed on the River Lea to construct a jetty to berth ships that will take 1.2 million tonnes of earth to Wallasea Island to create a new RSPB nature reserve as well as a facility to dock barges that will bring 120,000 concrete segments from Chatham in Kent to line the tunnels.