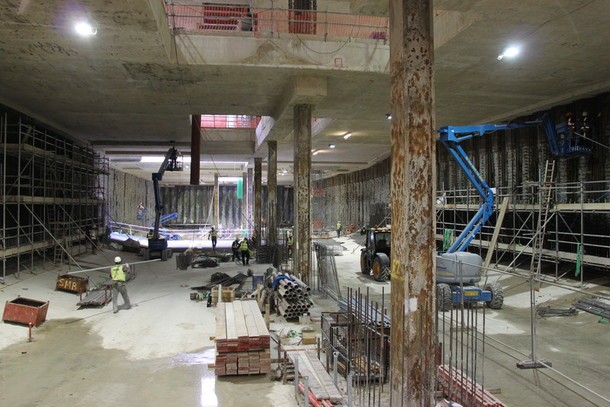 Two years on from the start of Crossrail’s construction, Canary Wharf Station, one of the largest along the Crossrail route, is the first to near structural completion below ground.

Rail Minister Theresa Villiers visited the Canary Wharf site yesterday to see the huge progress that has been made and witness the last of the soil being removed from the platform level, where trains will run from 2018.

The station, which has been built ‘top down,’ now extends 28m below the waters of North Dock in Canary Wharf, with the ticket hall and platform levels excavated. The station box needs to be complete for the two TBMs to break-through from the east of Canary Wharf in summer 2012.

Construction of Crossrail began in May 2009 at the Canary Wharf site.

On 24 December 2008, it was confirmed that Canary Wharf Group (CWG) would design and construct the station for a fixed price of US$822M. US$575M of the station’s costs will be met from Crossrail’s US$24bn budget with CWG providing US$246M and bearing the risk in relation to costs above the fixed price limit.

To enable construction of the station box, 296 steel piles measuring 18.5m high and 1.2m wide were sunk into the dock floor using 10 storey high piling cranes and ‘silent’ Giken Piling machines. This was the first time this type of machinery has been used extensively in the UK.

Around 100 million litres of water were then pumped out of the piled structure to create a 256m x 30m cleared site ready for ‘top down construction.’

Approximately 300,000 tonnes of materials have been excavated, with around a third reused onsite and the rest taken by river barge to help transform a former landfill into a conservation site at Holehaven Creek.

Engineering firms involved in the design of the combined station/retail development include:

Rail Minister Theresa Villiers said, “This anniversary represents a major milestone in the building of one of the most exciting transport projects in London today. Crossrail will create economically vital transport infrastructure set to transform the journeys of thousands of passengers.

“Since construction started on Crossrail two years ago, tremendous progress has been made – not only at Canary Wharf, where a station can now be seen to be taking shape – but right across the Crossrail route. Work is underway across all central London station sites – from Paddington to Whitechapel. Tunnelling preparations are expected to begin in late 2011 with full tunnelling commencing in Spring 2012.

“I look forward to seeing how far the project has advanced in another two years time.”

Boris Johnson, the Mayor of London, said, “The army of engineers working on this station have made phenomenal progress and a huge subterranean chamber has been created deep under Canary Wharf that will throng with Londoners when Crossrail is up and running. This project is crucial to the continued economic success of our city, which is why I fought so hard to guarantee its funding and with tunnelling set to begin early next year the construction of Crossrail is rapidly accelerating.”

Construction of the tunnel portal at Royal Oak in west London is advancing. A further four tunnel portals will be constructed as part of Crossrail at Pudding Mill Lane, North Woolwich, Victoria Dock and Plumstead. Such is the scale of Crossrail that up to 14,000 people will be employed at the peak of construction between 2013 and 2015. The UK Tunnelling and Underground Construction Academy in east London will be fully open by September 2011 and will offer training to at least 3,500 people.