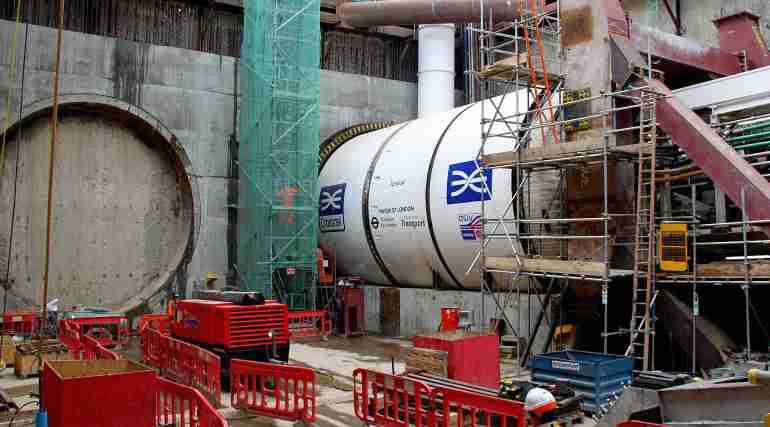 Crossrail’s seventh tunnel boring machine, Jessica, will start boring from Stratford today. The 1,000 tonne TBM will start building the 2.7km Crossrail tunnel from Pudding Mill Lane, near the Olympic Park, to Stepney Green. She will be followed by sister machine Ellie to build the second tunnel this winter.

Jessica joins six other Crossrail TBMs working under London which are fast approaching the half way mark in the tunnelling marathon with 18 km of tunnels completed. The new tunnels will connect east and west London and 37 stations from Maidenhead and Heathrow in the west, to Shenfield and Abbey Wood in the east.

Transport Minister Stephen Hammond said: “The Government is investing record amounts in the country’s infrastructure because we recognise its importance in driving the economy forward and pushing the UK ahead in the global race. The launch of the last pair of tunnel boring machines in the shadow of the Olympic Stadium marks another significant milestone in the Crossrail project, as we approach the halfway stage in our tunnelling marathon.”

Crossrail Programme Director Andy Mitchell said: “Crossrail is making good progress with more than 11 miles of tunnel now built. We’re delighted that our final two tunnelling machines, which start their race at Strateford, have been named after two Olympic heroines and will deliver their own tunnelling marathon under London. The Olympics legacy has transformed Stratford and east London, and Crossrail too will transform the way Londoners travel, and support regneration across the capital.”

Currently tunnelling machines Ada and Phyllis are constructing the tunnel between Royal Oak and Farringdon, whilst Elizabeth and Victoria, in east London, are building the Canning Town to Farringdon tunnel.

Finally, Mary and Sophia, in southeast London, are constructing the tunnel under the Thames between Plumstead and North Woolwich.

Once Jessica has completed her tunnel drive from Pudding Mill Lane to Stepney, she will then be partially dismantled and taken to the Limmo shaft at Canning Town to construct the final two Crossrail tunnels between Limmo and Victoria Dock Portal. This is the shortest of the Crossrail tunnels with each measuring 900m.

When Crossrail opens in 2018, it will increase London’s rail-based transport network capacity by 10 per cent, support regeneration across the capital and the south east, help to secure London’s position as a world leading financial centre, and dramatically cut journey times across the city.