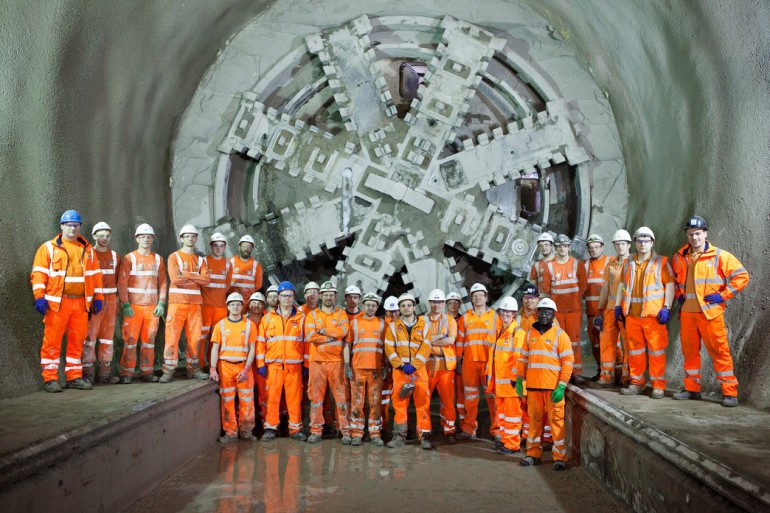 Crossrail has delivered an unprecedented fortnight of construction progress ranging from completion of new train tunnels to three tunnel boring machine breakthroughs. The western tunnels are now structurally complete with TBM Ada reaching the end of her journey at Farringdon on 24 January, having set out from Royal Oak near Paddington in August 2012. This follows the arrival of her sister machine Phyllis at Farringdon in October 2013.

Over in southeast London, TBM Sophia has completed Crossrail’s first tunnel beneath the Thames, arriving at the North Woolwich Portal on 29 January, having started south of the river in Plumstead last August.

TBM Jessica has also completed her tunnelling journey from Pudding Mill Lane and broke through into one of Europe’s largest mined caverns beneath Stepney Green on 3 February.

In addition, tunnelling machine Elizabeth made a spectacular entrance into the new Crossrail station at Whitechapel on 20 January on her journey from Limmo Peninsula to Farringdon. Her sister machine Victoria also broke through into Stepney Green on 30 January.

Crossrail has also finished civil construction of the first of two new Bond Street station ticket halls. The western ticket hall on Davies Street is five storeys underground, with works starting earlier this month on a passenger tunnel to connect the Crossrail ticket hall to the existing underground station.

The milestones continue Crossrail’s impressive construction progress, which recently passed the halfway mark on time and within budget. In 2014 the project will transition from major civil engineering work to station and tunnel fit-out. 30km out of 42km of bored tunnels are now complete.

Andrew Wolstenholme OBE, Crossrail Chief Executive said: “The tunnelling teams deserve tremendous credit for their safe and efficient progress in constructing this major new railway under London. The end is now in sight for Crossrail tunnelling with over 70 per cent of the new rail tunnels now constructed. The next major element of the Crossrail programme will now begin with the fit-out of our tunnels and stations.”

Ada’s 6.9km journey has been particularly challenging for engineers, successfully navigating a complex web of Tube lines, building foundation piles and infrastructure up to 30m beneath central London. This included passing less than a metre above the operational Northern line at Tottenham Court Road.

More than 72,000 pre-cast concrete segments have been used to line the western tunnels and about two million tonnes of earth has been excavated, destined for a new RSPB nature reserve at Wallasea Island, Essex.

Now that Sophia’s journey has finished, her sister Mary will shortly be launched from the Woolwich box to complete the final section of tunnelling on Crossrail’s southeast section. With the arrival of TBM Jessica at Stepney, an eighth tunnelling machine, Ellie, will commence her journey from Pudding Mill Lane to Stepney later this month.

TBM Jessica will be taken to Limmo Peninsula for reassembly where she will construct the new Crossrail tunnels between Limmo and Victoria Dock Portal.