Crushed wine bottles and other recycled glass could replace sand in vital tunnelling supports, cutting construction costs and improving the sustainability of sand mining, according to University of Queensland (UQ) engineers.  The UQ team is working on the second phase of an industry-sponsored project using crushed waste glass (CWG) to replace sand in shotcrete used to support tunnels and underground spaces. 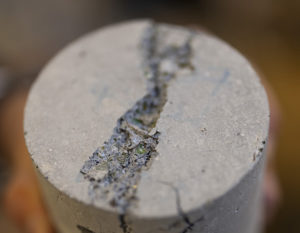 Dr Mehdi Serati from UQ’s School of Civil Engineering said the amount of sand in the world was finite, so ingenuity was necessary to solve the problem of a looming shortage.

“If we don’t do something about sand depletion at a global scale, our grandchildren are not going to see sandy beaches,” Dr Serati said.

“Over the past 20 years the cost of sand has increased by six times, and it’s the second most consumed natural product globally, after fresh water.“

CWG is made up of recycled glass from wine bottles and other products, which are usually stockpiled or sent overseas for other countries to process and store as waste.

Dr Serati said CWG had a number of advantages as a potential replacement for sand.

“It’s a cheaper product because it’s using waste from one industry and turning it into treasure for another,” he said.

“It also uses less water, as glass has zero water absorption, so really there is a triple benefit in terms of conservation, cost and saving water.”

Results are positive after one year of testing with CWG showing promise as the next generation of sustainable material.

“We feel the next phase of the project is to manage the combinations of recycled glass and other ingredients to optimise shotcrete for CWG rather than for sand,” Dr Serati said.

“And it’s timely because we’re right at the start of a tunnelling boom in Australia.

“I think by 2030, five or six out of ten infrastructure projects in Australia will be either directly or indirectly linked to tunnelling.”

“The results so far show that using CWG as a replacement for natural sand is a viable option as the concrete was able to meet and sometimes exceed the results from the base mix,” Mr Jackson said.

“This would allow the industry to look at alternative options for replacing natural sands with a viable solution, in that CWG can be used in shotcrete for tunnels and civil works.

“There would need to be a further study carried out on the fire resistance of concrete containing CWG for the shotcrete to be able to be used in all aspects of the civil tunnel environment.”

UQ Adjunct Professor and Aurecon’s Dr Harry Asche said the results so far were exciting, and confirmed a significant opportunity in concrete and shotcrete technology.

“Aurecon is strongly committed to research in shotcrete and sustainability.

“We are using innovative engineering practices to ensure we have a resilient environment and are promoting a circular economy model of reuse and recycle to reduce emissions and increase the efficiency of natural resources.

“One of the exciting things about this technology is that it could be implemented on major projects very soon.”

The idea for this project came from UQ research using CWG to strengthen soil in the construction industry. Industry and individual support from Dr Harry Asche (Aurecon), Niki Jackson of GCP Applied Technologies (Sydney, Australia), and Enviro Sand has allowed the project’s extension.