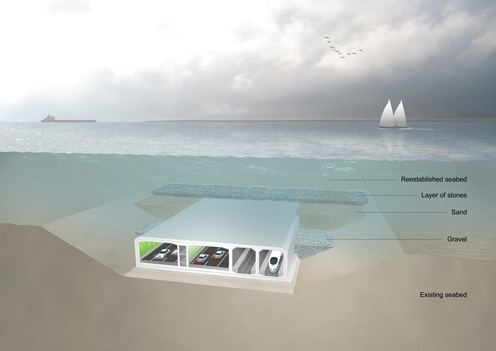 Danish politicians have chosen the US$7bn, 18km long immersed tube tunnel option designed by the Rambøll/Arup/TEC JV as their preferred solution for the construction of the Fehmarnbelt crossing linking Denmark and Germany. The tunnel beat a cable-stayed bridge alternative after cost estimates in November last year placed the bridge at US$7.2bn.

Leo Larsen, CEO of Femern A/S, the organization appointed by the Danish Transport Minister in April 2009 to plan a fixed link across the Fehmarnbelt, said, “We welcome the political support for our recommendation that the future link be designed as an immersed tunnel. The decision means that Femern A/S has reached an important milestone in the planning of the fixed link. As our conceptual design projects are based on an extremely thorough, technical foundation we can now focus on ensuring that the authorities approve the project, including from an environmental perspective.”

Over the coming year, Femern A/S will prepare an Environmental Impact Statement to be considered by the authorities in Denmark and Germany in accordance with national regulations.

“The aim is to build and operate one of Europe’s safest and most modern tunnels for both trains and cars, which will bring Northern Europe and Scandinavia even closer together,” said Leo Larsen. “As a result we’ll create opportunities for increased growth and prosperity for more than 10 million residents in the Fehmarnbelt Region.”

The construction of one of Europe’s biggest infrastructure projects is expected to commence in 2014. The link is scheduled to open to traffic in 2020.

When completed, the Fehmarnbelt link will be the third huge infrastructure project in Southern Scandinavia over the past three decades. In 1997 and 1998, the Storebælt Bridge opened to rail and road traffic respectively, linking the Danish islands of Funen and Zealand. In 2000, the Øresund Bridge between Denmark’s capital, Copenhagen, and Malmö, Sweden’s third largest city, opened to traffic. Since their commissioning, the two bridges have contributed very significantly to economic growth in their respective areas.