Last Friday tunnelers, politicians and members of the public alike celebrated the initial breakthrough of the 4200ft (1.25km) Devil’s Slide twin tube tunnel project in San Mateo County, California. Three years after breaking ground on the project, and about four weeks ahead of schedule, Kiewit holed through on it’s northbound tunnel at the northern portal using an ATM-105 roadheader, greeting a crowd of invited guests gathered atop the Devil’s Slide bridges. Breakthrough on the southbound bore will follow later this week, with tunnel widening, final lining, drainage and ventilation operations ongoing through 2011. 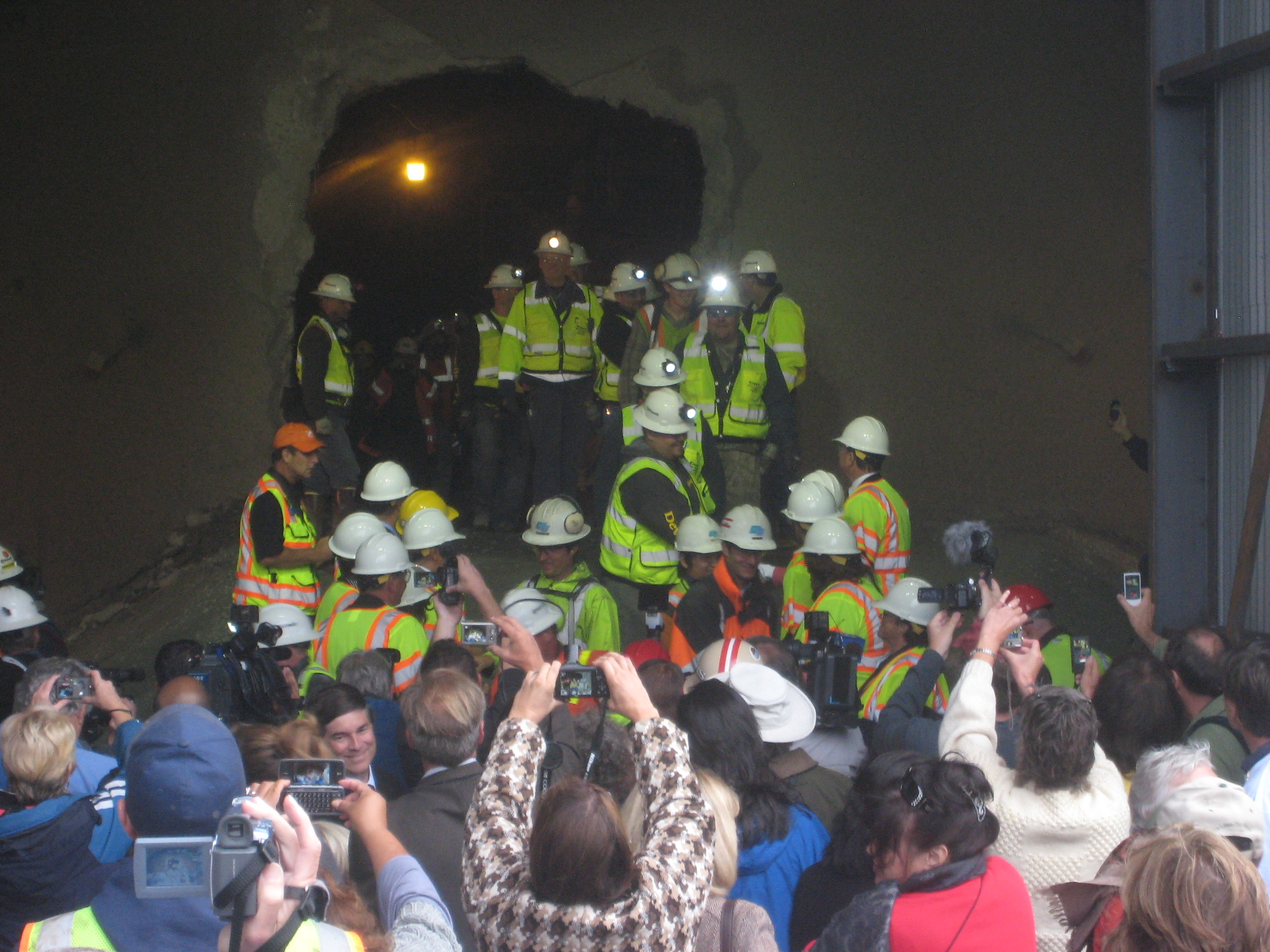 Crews are greeted by a crowd of guests at the ceremony

NATM excavation of the tunnels has been carried out from the South Portals using roadheaders and occasional drill & blast excavation through the San Pedro Mountain ridge. Ground conditions have included moderately-strong to strong crystalline rock, including several fault zones, in the south; sandstones and conglomerates in the central portion of the alignment; and claystone, siltstone and sandstone with regions of poor rock quality in the northern section.

Initial support has consisted of fiber-reinforced shotcrete, lattice girders and rock dowels, with grouted pipe spiling and pipe roof umbrellas also being employed through fault zones. The final lining comprises an application of smoothing shotcrete and installation of a PVC membrane waterproofing system, followed by an arch of reinforced cast-in-place concrete that is being formed using two sets of 40ft (12m) long shutters long shutters, manufactured by Ceresola. 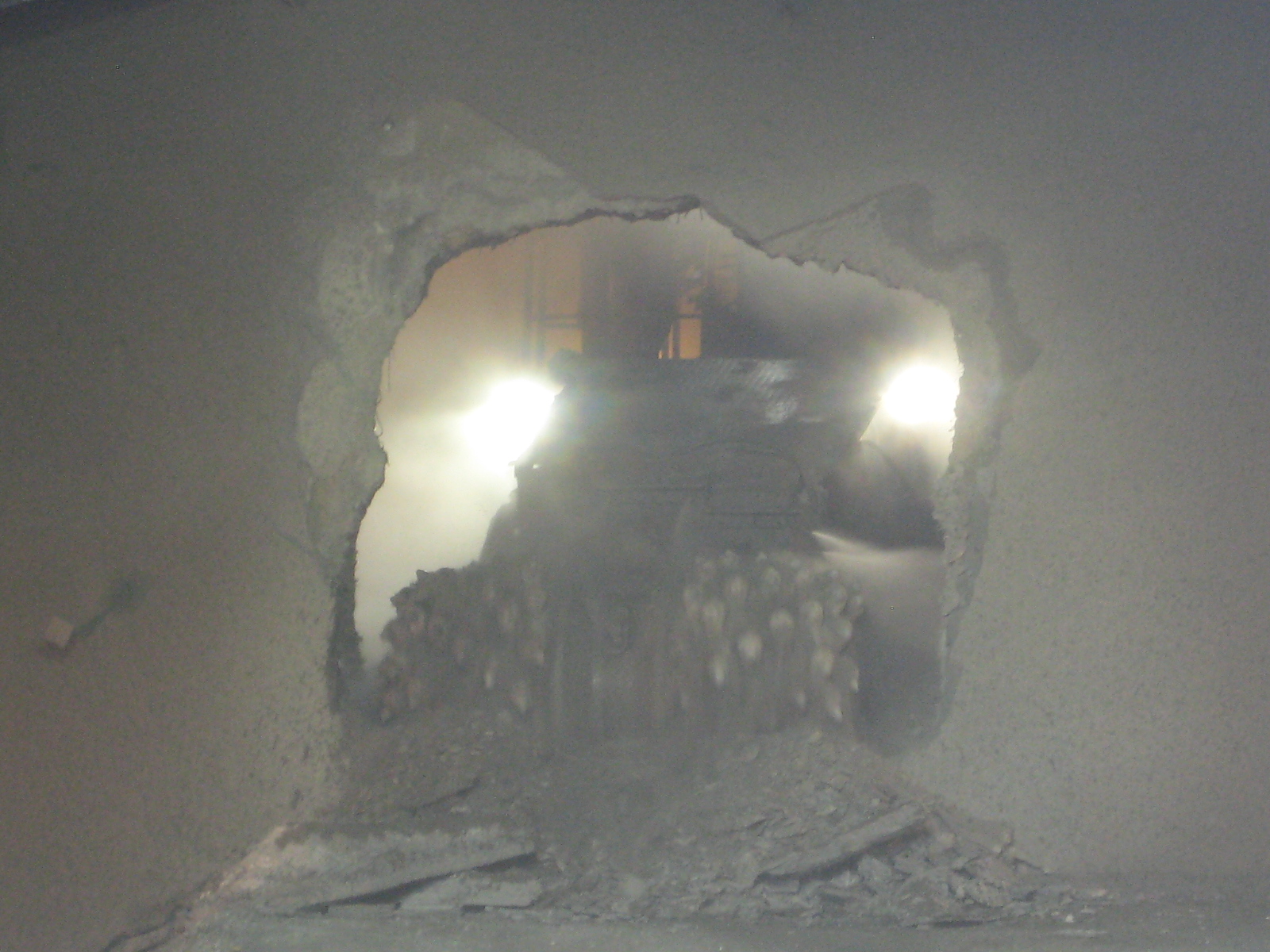 An ATM-105 roadheader breaks through at Devil's Slide

Client, the California Department of Transportation (Caltrans), awarded construction of the twin tunnels – the state’s first highway tunnel project since the third bore of the Caldecott Tunnel opened in 1964 – to Kiewit on January 3, 2007. The design was performed by HNTB, with ILF as the NATM tunnel consultant. A joint venture of URS and Dr. G. Sauer Corporation is performing construction inspection and scheduling services.

When open, in 2012, the tunnels and two 1000ft long bridges that are also part of the scheme will re-align a challenging portion of California’s coastal Route 1, which has suffered numerous landslides and closures. The $340 million public works project will be will be named in honor of Tom Lantos, the late San Mateo congressman who secured $175 million in federal funds for the bypass. Lantos worked for three decades to bring the project to light and lived to see the tunnels get underway before he died in early 2008 at the age of 80. Caltrans held a special dedication during the ceremony on Friday with state Senator Leland Yee and San Mateo County Supervisor Rich Gordon in attendance. 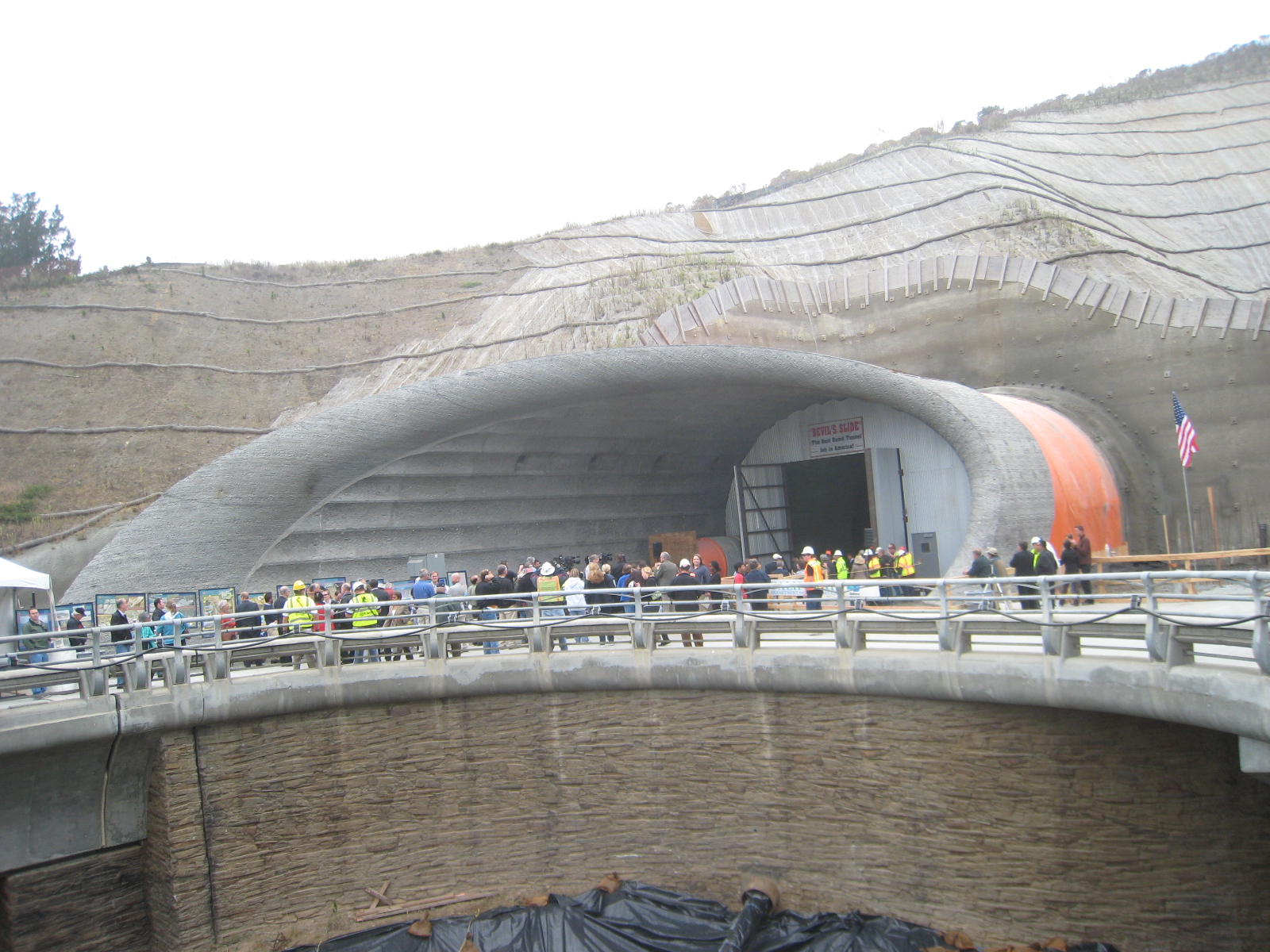 The northern portal of the northbound Devil's Slide tunnel

“I am excited to see the completion of this project within reach. I was proud to push legislation that transferred the land to allow for the construction of the tunnel and I was prouder still to author the bill to name this landmark the Tom Lantos Tunnel. I am now looking forward to the day we open the tunnel and celebrate this environmental and public safety milestone,” said Yee.