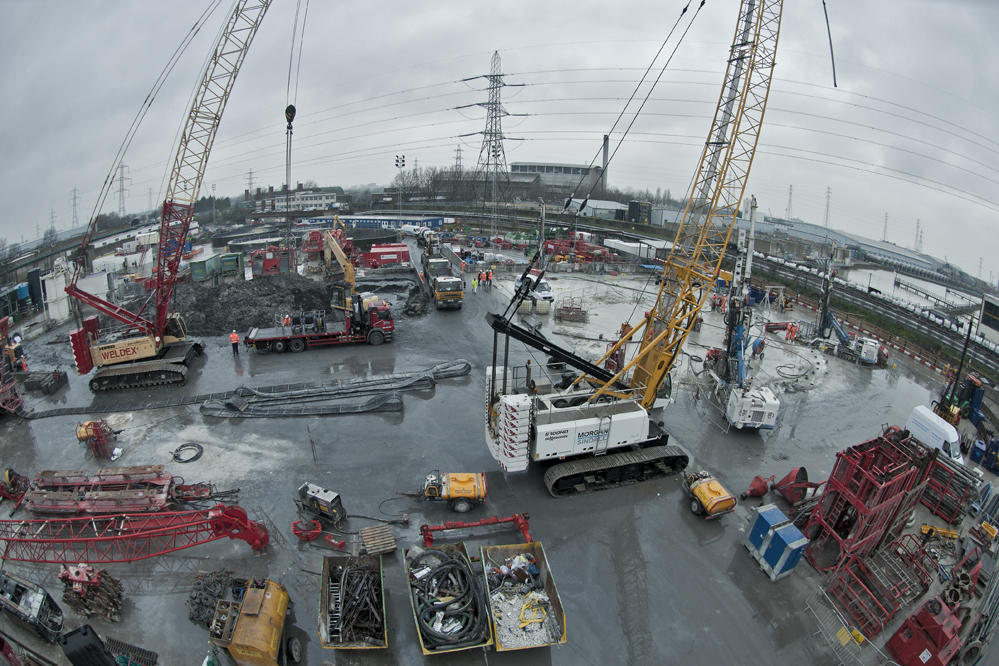 In mid February, four months after construction started, the MVB JV team completed the diaphragm wall forming the shell of the Beckton overflow shaft – the first of the four shafts being constructed on Thames Water’s US$1bn, 6.4km long Lee Tunnel project in London.The 90m deep shaft, with 1.5m thick walls, is the first to be constructed as it will be the launch site for the 8.88m diameter TBM at the start of next year.

The construction of the 98m deep, 1.8m thick diaphragm wall for another shaft – the Beckton pumping shaft – started in January this year. This shaft is the biggest on the project and will be a challenge for the team as water pressure at the chalk base will be around eight bar.

Work on the final shaft at Beckton, the 79m deep connection shaft, will start this month.

Over 10,700m3 of concrete has been poured at the overflow shaft to date and as much excavated soil discharged directly into barges via a conveyor belt. Two 140 tonne hydrofraise rigs and a rope grab are carrying out the Lee Tunnel diaphragm walling.

The impressive Lee Tunnel shafts are some of the deepest ever constructed in Europe.

Construction of the Lee Tunnel project is set for completion in 2014. It will prevent more than 16 million tonnes of sewage from overflowing into the River Thames, via its tributary the River Lee, each year.

The Lee Tunnel will be up to 75m deep, running from Abbey Mills Pumping Station in Stratford to Beckton Sewage Treatment Works.

The 7m diameter tunnel – the width of three London buses – will capture 40 per cent of the 39 million tonnes of sewage that is discharged into the River Thames each year. The tunnel will transfer the flows to Beckton Sewage Treatment Works, which is being expanded to deal with the additional volumes.

The contract for the Lee Tunnel was awarded by Thames Water to MVB – a joint venture consisting of partners Morgan Sindall, VINCI Construction Grands Projets and Bachy Soletanche – in January 2010.