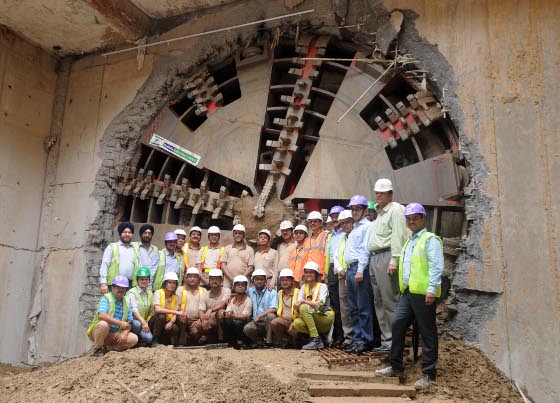 The Herrenknecht EPBM emerged at the Janpath metro station site after completing a 909.3m-long drive from Chelmsford Club on the Down Line. The TBM was lowered into the Chelmsford Club shaft on January 31, 2012, and following assembly of the TBM below ground was launched on March 4.

The TBM was driven by Mohd Ali, India’s first TBM Operator, (assisted by Ram Avtar Singh Rana) at an average depth of 18m. During the drive a total of 648 pre-cast reinforced concrete rings were installed. The rings, which are being manufactured at the Mundka Casting Yard, comprise five bolted 275mm thick x 1.4m long segments, providing a finished internal diameter of 5.8m. 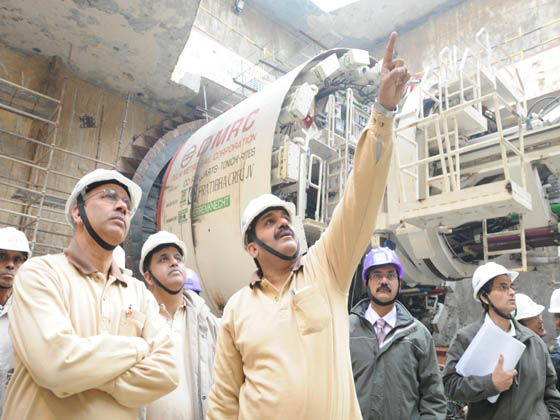 Pratibha CRFG JV is constructing the Central Secretariat to Mandi House station stretch of tunnelling, which includes cut and cover stations at Janpath and Mandi House.

Another TBM is currently working on the 898m-long Up Line tunnel, which is expected to breakthrough in another two months.

The 3.2km underground extension of the Central Secretariat – Badarpur corridor (Violet Line) is scheduled for opening in July 2014. The corridor will further extend to Kashmere Gate and will have two interchange stations at Mandi House and Kashmere Gate to meet the Phase III completion target of March, 2016.

Sudhir Krishna, Chairman of DMRC, was present at the site during the breakthrough along with Shri Mangu Singh, DMRC’s Managing Director. Krishna congratulated the DMRC team and said that such engineering feats boost confidence in civil engineers and place them on a high pedestal. He highlighted that India’s first TBM Operator drove the TBM and also that India intends to start manufacturing TBMs in the near future.

Shri Mangu Singh said that the first breakthrough on any project is always significant. He expressed satisfaction over the fact that this breakthrough was achieved on schedule and congratulated the DMRC engineers and the Contractor for achieving this milestone.