Following an official signing ceremony between Deutsche Bahn (DB), the German rail company, and Czech company Správa železnic, a €5.4bn high-speed rail link will now be developed between Germany and the Czech Republic which will include the construction of an up to 26.53km long tunnel beneath the Ore Mountains. 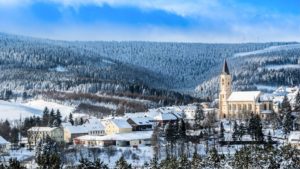 In full, the line will join Dresden in Germany, with Prague by 2050, although the first part of the project, between Prague and Lovosice, is slated for completion between 2030 and 2035.

The 26km long cross border Base Tunnel, with 15.1km in Germany, and 11.43km in Czech, is currently designed as a twin-tube configuration in accordance with international safety regulations. and will have cross-passages every 500m with an underground rescue station at Börnersdorf.

Currently a detailed feasibility study for the complete line is underway, with seven route and three tunnel options being assessed. Results and costs are scheduled to be available this summer. Tenders are also under preparation for the tunnel.