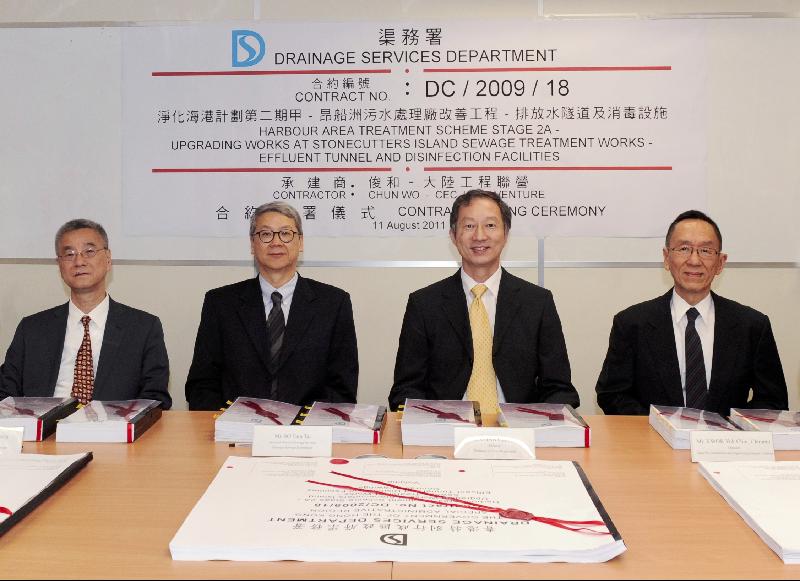 The Hong Kong Drainage Services Department (DSD) today awarded a $680M contract to the Chun Wo/CFC JV for the construction of an effluent tunnel and disinfection facilities on the Harbour Area Treatment Scheme (HATS) Stage 2A.

Speaking after the contract signing ceremony, the Director of Drainage Services, Mr Chan Chi-chiu, said that this is the 10th major works contract awarded.

“The contract, comprising mainly the construction of an 880m long effluent tunnel with an internal diameter of 8.5m and disinfection facilities at the Stonecutters Island, is scheduled for completion in early 2015. The tunnel serves to convey the treated effluent from the Stonecutters Island Sewage Treatment Works (SCISTW) to an existing outfall drop shaft and provide sufficient retention time for disinfection. The effluent tunnel will be constructed in a rock layer at a depth of 90m, such that it would not constrain the development potential of the land above the effluent tunnel. The drill and blast method, which is a more reliable construction method at such depth, will be adopted for the tunnel construction,” Mr Chan said.

HATS is a major sewerage infrastructure project in Hong Kong to improve the water quality of Victoria Harbour and involves the construction of approximately 21km of sewage tunnels as well as the expansion and upgrading of the SCISTW and related preliminary treatment works on Hong Kong Island. The commissioning of HATS Stage 1 in late 2001 has provided proper treatment to about 75 per cent of the sewage discharged into Victoria Harbour, and has significantly improved the water quality in the eastern and central parts of the harbour. HATS Stage 2A will collect the remaining 25 per cent of the sewage generated from northern and south-western parts of Hong Kong Island. Construction of HATS Stage 2A works commenced in July 2009.